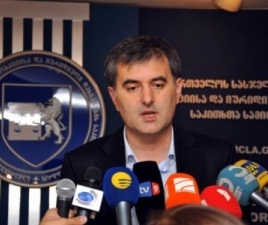 Prison Minister Sozar Subari says the situation in the prisons is the fault of the Saakashvili government and threatens to prosecute people demonstrating outside of prisons. (IPN.)

TBILISI, DFWatch — The unrest in Georgia’s prison system has spread to the most infamous facility in the country: Ksani prison north of Tbilisi.

At No 15 Facility, as it is officially called, thousands of prisoners have gone on hunger strike demanding that the recently appointed director is fired, and that six longtime employees follow suit.

Journalists, who recently were allowed to visit prisons without going through strict procedures, report that about 2 000 prisoners are on hunger strike at the prison in Ksani, from where numerous complaints about maltreatment have originated in recent years.

Their major demand is to fire Nukri Khukhua, the new director; and that six longtime employees also are removed. They further want improvement in their situation in terms of medical treatment, and demand that several doctors are fired.

Journalist working for Interpressnews report from the prison that the majority of prisoners refused to eat today, except those who are seriously ill.

Monday, prisoners told journalists they request cameramen and photographers to be let inside to observe what is happening at prison.

“If our demands aren’t met the number of strikers will increase,” prisoners say, calling on family members to continue the vigil outside the prison gates.

These are the same demands at prisoners in Rusitavi prison have, where there has been a tense situation the last week. Prisoners demand better conditions, while their family and relatives are staying put at the gates.

Maya Khasia, Director of the Corrections Department, said at a press conference Monday that no one will be fired only because someone do not like them.

She said there is an inquest in progress to study the situation, but it is not correct to fire personnel on prisoners say-so.

She calls on people outside the prison not to make unreasonable steps.

“In the morning, a truck carrying of food was not let inside the prison where there are more than 3 400 prisoners. There may be prisoners in a difficult health condition. It’s not correct to block the road for this truck,” she explained.

Meanwhile, Prison Minister Sozar Subari said that the situation in the prisons today is related to the former government and he says every prisoner who violates the law will be punished.

“They have levers for riots and they use it, but everything is under control. In this days one thing was revealed – while there was noise outside and claims that riot police was brought inside beating prisoners, in fact there was absolute peace inside,” he said. “Nothing is happening inside, but outside the situation is deliberately brought to tension.”

He said every prisoner engaged in an attempt to organize riot will be punished. Such cases are under investigation right now.

The minister reminded people outside the prisons about the law regulation that it is prohibited to organize any type of rally within 20 meters of a prison. From now on such actions will be punished as defined by law.