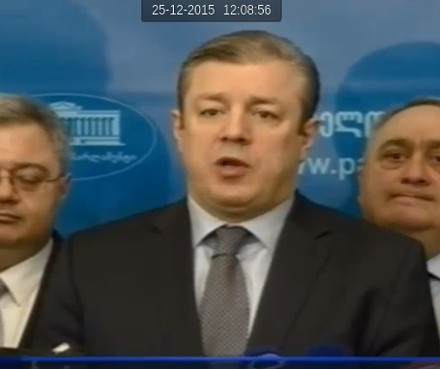 TBILISI, DFWatch–The Georgian Dream coalition has agreed on Giorgi Kvirikashvili as their candidate for new prime minister, as replacement for Irakli Garibashvili, who resigned Wednesday evening.

Kvirikashvili is former vice prime minister and minister of foreign affairs. He was named as candidate for new PM at a session of the parliamentary majority Friday morning at the parliament office in Tbilisi.

Speaker of Parliament Davit Usupashvili and Irakli Garibashvili arrived together. Before the meeting began, Gia Volsky, leader of the GD faction in parliament, told journalists that he held consultations with Garibashvili on Thursday. He said he had expected Garibashvili to name Kvirikashvili as his successor, as he has ‘good skills’ and is a member of GD’s ‘political family.’

The session is closed for the media. Thursday evening, Volsky said on Channel 2 that Kvirikashvili would be named as a candidate by acting PM Garibashvili.

“We considered four candidates, and agreed on one of them.”

Giorgi Kvirkashvili (48) was appointed foreign minister on September 1, 2015. Before that, he served as minister of economy since October 25, 2012, and from 2006 to 2011, director of the Ivanishvili-owned Cartu Bank. He has a wife and four children.

He has experience working for several banks. From 1999 to 2004 he was a member of parliament and used to be deputy head of the committee for economic policy. Earlier, he worked at the government office, in the economics department.

After the session was over, Garibashvili told journalists that he is also leaving the post as party leader for Georgian Dream – Democratic Georgia.

“I plan to have a rest. Time will show us what happens next,” he said.

“Giorgi is my friend and I want to wish him success. We have worked together for a long time even before going into politics.”

Kvirikashvili said after the session that he cannot rule out a cabinet reshuffle.