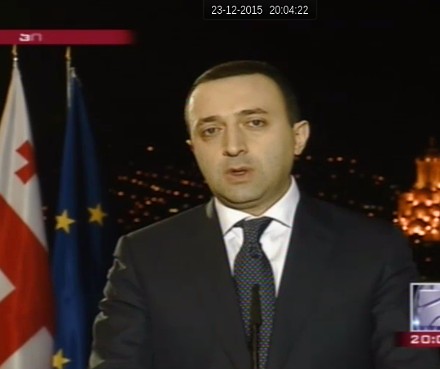 TBILISI, DFWatch–Prime Minister Irakli Garibashvili announced his resignation in a brief TV address on Wednesday, after more than two years in the post.

He did not state any specific reasons for leaving, nor offer advice on who his successor should be, which ultimately will be up to parliament to decide.

In his address, the outgoing PM underlined his achievements at the helm of the Georgian Dream government: signing the association agreement with the European Union in 2014, which included an extensive free trade agreement, progress with an action plan toward visa-free travel with the EU, returning ‘freedom and honor’ to the people, and involving Georgia in the Silk Road project.

He compared his leaving the post with how his predecessor, businessman Bidzina Ivanishvili, also left office, saying that the letter resigned at peak of his success, setting an example for other politicians that a good politician ‘timely comes and leaves.’

“Peace and stability was established in the country while I was on the post of Prime Minister,” he said.

“I leave the post and remain a soldier for the state.”

He said that holding any post in government was not his goal, but he always intends to serve his country and people.

Georgian media have carried reports that the new prime minister will be Giorgi Kvirikashvili, but as no clear message was forthcoming in tonight’s address, media turned toward explaining the procedure of appointing a new head of government – formally the most powerful political office in the country. The parliamentary majority first has to announce a candidate, whom the president will present to parliament for confirmation. 76 votes are enough. The Georgian Dream coalition controls 86 seats in parliament.

Garibashvili became PM on November 20, 2013. From October 25, 2012 until November, 2013 he was interior minister. Before joining the government, he worked for the Cartu charity fund, which is affiliated with Ivanishvili.