Gharibashvili to decide who will replace him as interior minister

Gharibashvili to decide who will replace him as interior minister 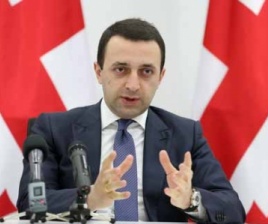 It was earlier thought that outgoing Prime Minister Bidzina Ivanishvili would decide who will take over as Interior Minister.

Ivanishvili explained that now it is enough and Gharibashvili will name his replacement himself.

Tina Khidasheli, a member of parliament for the Georgian Dream coalition, said Saturday that the coalition is considering several candidates for the post as interior minister.

“But he is not yet picked, and I won’t name their surnames because it would be awkward with the other candidates who won’t become interior minister,” she said.

There have been speculations in the media that Energy Minister Kakhi Kaladze would become new interior minister, but Kaladze denies that he is a candidate.

Davit Saganelidze, leader of the parliamentary majority, said Saturday that no significant changes will be made in the government, but there may be minor replacements.

“This issue is a subject for the prime minister to decide,” he said, adding that the coalition might appoint Irakli Gharibashvili as chairman of Georgian Dream Democratic Georgia, the party which Bidzina Ivanishvili is leader of. The party will discuss this issue at a party congress on November 24.