Georgia’s universal health insurance will not be changed

Georgia’s universal health insurance will not be changed 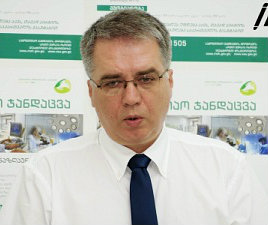 TBILISI, DFWatch–Georgia’s minister of healthcare says there is no plan to change the system of universal health insurance, but the government is considering a number of reforms.

Appearing in parliament Wednesday to talk about last year’s achievements, Health Minister Davit Sergeenko said that the argument used by critics of universal healthcare is that wealthy citizens are also using it, but he says this is irrelevant, because more than 600,000 people – about 17 percent of the population – are using private corporate insurance this year.

“This is a part of the population with high or average income and the government doesn’t spend money on them, but directs the money to those who have low income, are socially vulnerable or require more support from the government,” he said during a meeting with the healthcare committee.

The National Movement and the Free Democrats criticize the current system of universal healthcare and wants it abolished. They think the government shouldn’t equally finance wealthy and poor citizens.

Despite the fact that insurance system is thought to be the most successful initiative of the government, Giorgi Kvirikashvili, Prime Minister, also criticized it on April 15 during a meeting with journalists.

Universal health insurance was one of Georgian Dream coalition’s election promises in 2012. It came into force just a few months after the election, on February 28, 2013. July 1 that same year, the program was expanded to also include medical services during pregnancy and treatment for cancer patients.