Georgia’s U19 team gets first point in UEFA championship

Georgia’s U19 team gets first point in UEFA championship 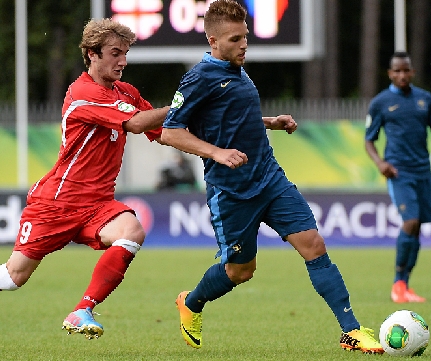 Georgia’s U19 team took its first point in the European championship Sunday in a match against France that ended 0-0. (UEFA.)

TBILISI, DFWatch–Georgia’s U19 football team played 0-0 against France on Sunday, gaining its first points in the European championship in Lithuania.

“I’m really dissatisfied with the first half of the match. The other half was better,” Georgian U19 coach Gia Tsetsadze said. “The competition continues and we will try to win as many points as possible in the remaining matches.”

On Tuesday, Georgia will face Serbia for a second time. The two teams met in Portugal on April 25, and Serbia won 2-1. Serbia also defeated Turkey by 2-1.

Georgia is in group B in the 2013 UEFA European Under-19 Football Championship, together with Serbia, France and Turkey, and is in second place right now with one point.

After the match against Serbia, Georgia’s U19 team will play against Turkey on July 26.

The European under-19 championship began July 20 and ends on August 1. This is the first time Georgia has qualified.