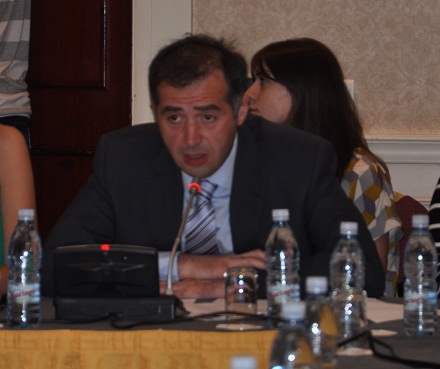 Kakhi Kurashvili, lawyer at the communication commission, must get regional broadcasters to comply with the rules for free political ads. (Photo: Mari Nikuradze.)

TBILISI, DFWatch – Georgia’s National Communications Commission (GNCC) claims that broadcasters will be forced to air free political commercials, even if they don’t air paid commercials. Regional broadcasters say it is an incorrect interpretation of the law, which will seriously affect them.

August 7, Kakhi Kurashvili, lawyer at GNCC, held a meeting with broadcasters to work out the details in this regard.

The legislation has been amended several times in the last 9 months, after Georgia’s richest decided to go into politics. The amendments mostly have to do with the election code, but also new definitions for media activity.

But representatives of regional broadcasters said the majority of them don’t even get requests for paid commercials and they do not have any interest in airing free commercials, as they are already in a financial crisis.

Now, Kakhi Kurashvili focused on article 51 of the election code, which says that what is called a ‘ common broadcaster’ [a TV channel which has news], and a broadcaster which airs commercials, are obliged to freely and without discrimination allocate 90 seconds in every three hour for each qualified election subject.

The GNCC lawyer says that the legislator wouldn’t have specified ‘broadcaster, which will place commercials’ separately if it was only obligation for broadcasters which is going to air paid commercials.

But at the meeting, representatives of regional broadcasters said this was a wrong interpretation of the law, adding that during three elections in a row, they didn’t sell any political commercials and accordingly didn’t air free commercials either.

Media.ge quotes Marina Kupatadze, director of TV company Borjomi, who says that if she will be forced to air free commercials, then which political party will pay for paid commercials, she asks.

“There are 16 qualified subjects, and allocating 90 seconds for each of them in every three hours is a very big amount in total,” she said.

But Kurashvili said he had consultations with the Central Election Commission’s legal department, which confirmed that the rule is correctly interpreted.

Later, the CEC published a list of qualified election subjects on their website, which will be able to use free commercial time on broadcasters.

CEC published a list of parties that satisfy all criteria described in the election code. They independently participated in the elections in 2008 and 2010 and surpassed the 4 percent threshold, and were united in an election bloc which received not less than 4 percent of votes and was first number in this bloc.

Those are: the Labor Party, National Movement, Conservative Party, Christian Democrats, Republican Party and Industry will Save Georgia.