Georgia’s ruling party not planning final rally ahead of election

Georgia’s ruling party not planning final rally ahead of election 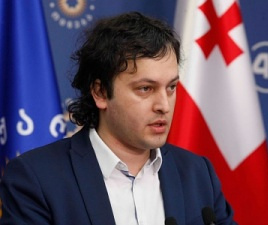 TBILISI, DFWatch–Georgia’s governing party denies that it is planning a final campaign rally before the parliamentary election, despite claims to the contrary from its challenger UNM.

One of Georgian Dream’s main challengers, the National Movement (UNM), plans to rally its supporters in Tbilisi on October 2, six days before the election, and claims the ruling GD is planning a rally the same day.

But GD secretary general Irakli Kobakhidze denied that on Monday.

“We never announced any rally. The prime minister made a statement about this. Our main rally will be on October 8, when millions of supporters will come to the election and vote for Georgian Dream,” Kobakhidze said.

Nika Melia from UNM claims GD is planned a rally in Tbilisi at the same time and place as his party.

“Let them declare when they plan a final rally in Tbilisi. We have information that it will be on October 2, instead of October 5,” Melia said, adding that October 5 is a working day and the party is not able to mobilize public employees in Tbilisi.

Melia said UNM is experiencing difficulties renting minibuses in the regions to bring people to Tbilisi for the rally. He claims the vehicles have already been booked that day, by GD.

The prime minister and the GD party secretary rejected Melia’s claim, and said the governing party is not planning any rallies.

“We are the ruling party. We are in government. We have in fact almost won the election and we don’t plan any rallies, any discomfort for our citizens, like blocking the streets,” Kvirikashvili told Rustavi 2.

He said that October 8, when Georgian Dream wins, they will hold a big rally.

But Eka Beselia, Gedevan Popkhadze and other GD politicians earlier claimed that the party was planning a rally on October 2.

“October 1 is the anniversary of Georgian Dream’s victory and we plan certain events in the regions, and October 2 was logical for us to think of,” Popkhadze told Rustavi 2.

Beselia told the newspaper Rezonansi that they planned to hold a rally on October 2.

“Our final event is planned on October 2. This is not a counter-rally, this is a planned event,” she said.

But later GD rejected that there was planned a rally.