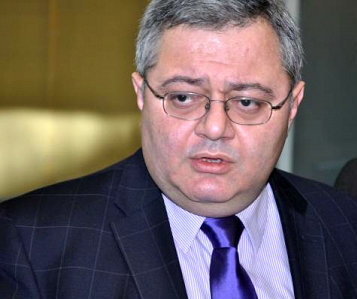 TBILISI, DFWatch–The speaker of the Georgian parliament went on the offensive Thursday against former President Mikheil Saakashvili and in defense of the billionaire who brought together the current government coalition, Bidzina Ivanishvili.

Speaker of Parliament Davit Usupashvili’s open letter was published in the International New York Times and for the most part describes Ivanishvili’s personal character as a patriotic Georgian and not the Russian stooge Saakashvili often portrays him as.

Highlighting a factual error by Saakashvili – that Ivanishvili is the largest shareholder in Gazprom – the parliament speaker writes: “the truth is that Ivanishvili bid farewell to his last Gazprom stock seven years ago.”

Usupashvili’s open letter comes two weeks after parliamentarians in the Council of Europe agreed on a resolution which went far in implying that the trials against former officials from the National Movement are politically motivated, especially the recent charges against Saakashvili.

“I understand the reaction of former President Saakashvili’s political friends. It is hard to see your one-time political ally ruined and charged with a crime. […] For years they have been recipients of misinformation from Georgia about how democracy was thriving in our country,” Usupashvili writes, apparently in response to the PACE resolution.

Ivanishvili has several times used the open letter style, which is common in Georgian public debate. He ran a full page ad in the Washington Post and the New York Times on January 30, 2012, and a few months earlier announced his decision to go into politics in two open letters published in Georgian media in October 2011.