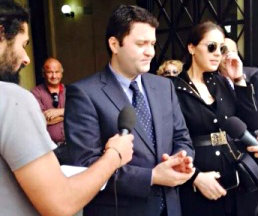 TBILISI, DFWatch–A court in Greece has refused to extradite a former Georgian official who is charged with involvement in the murder of a bank employee and several other crimes, including abuse of power.

Data Akhalaia is seen as a close ally of ex-President Mikheil Saakashvili and the most feared among his power clique.

He ran the domestic intelligence service Constitutional Security Department  (‘Kudi’) in a way that spread fear through society.

Akhalaia, along with his younger brother and father, also former high ranking state officials, still remain highly controversial figures in Georgian society. Many people view them as the personification of evil, while others see them as a justified in their brutal methods because it was necessary in order to break the grip that criminals had on society.

“The court concluded that there is political persecution in Georgia,” Data Akhalaia told Rustavi 2 TV after the court hearing.

Now he plans to apply for political asylum in Greece and expects a positive answer by the end of the year.

The exiled official’s lawyer Ilias Ananostopulous said the court rejected his extradition due to the risk of political prosecution in Georgia. “This is a signal to the Georgian authorities to stop (politically) prosecuting members of the previous government,” the lawyer said.

Georgian Prosecutor’s Office declined to comment on the issue due to the fact that they had not yet formally received the Greek court’s decision.

Data Akhalaia was arrested in April as he was trying to leave Greece and enter Italy using a fake passport issued in the name of Otar Urushadze. He was released on a 100,000 euro bail.

Data Akhalaia is the second former high ranking official the European courts denied to extradite to Georgia. Earlier this year, a court in France ruled against extradition of Davit Kezerashvili, who was defense minister during the war between Georgia and Russia in August 2008.

The court ruling in Greece was greeted by Roland Akhalaia, Data’s father, MP for the UNM, while his younger brother, Bacho, is still in jail in Georgia.

The Akhalaia family enjoyed immense power during the National Movement’s near decade-long reign. The father, Roland, was chief prosecutor in the Samegrelo-Zemo Svaneti region, but according to numerous accounts he used to have influence over the governor and other officials and was the real decision-maker in the region.

Data’s younger brother, Bachana, or Bacho, Akhalaia, served as head of the Penitentiary Department of the Ministry of Justice, then minister of defense and briefly, in 2012, as minister of internal affairs. He has been regarded by opponents of the National Movement as the architect of the abuse system in Georgian prisons and was arrested in November, 2012, soon after Georgian Dream took over power.

He is now in prison and tried for various offenses.

Data Akhalaia left Georgia immediately after the UNM’s defeat in the October 1, 2012, parliamentary election, along with many other party tops, including the justice minister.

Generally, the Akhalaia family has been surrounded by great controversy during the last decade. Saakashvili government opponents view them as the most evil in the country, accused of murders and grave power abuse. Although Bacho Akhalaia wasn’t head of the penitentiary during the release of the infamous videos depicting appalling abuse of inmates in Georgia’s prisons, he was still held responsible, as a symbol of the abuse.

Data Akhalaia held high posts at the Interior Ministry and then chaired ‘Kudi’, which was one of the most important bodies at the ministry. The opposition at that time accused ‘Kudi’, along with the Special Operations Department, or ‘Sodi’, of attacks on the political opposition during mass protests in November 2007, April 2009 and May 2011.

Then Data became deputy defense minister, while his brother became interior minister. People thought that Bacho Akhalaia still controlled the Defense Ministry through his brother after being appointed to the new post, which happened several months before the parliamentary election in 2012.

Data Akhalaia’s name has become so tainted by all this that even then President Mikheil Saakashvili claimed in one speech that he barely knows him.

At the same time there are people in Georgia who see the Akhalaia brothers as symbols of the tough methods that in their opinion were necessary to get rid of corruption and crime.