Update: Two teens captured for vandalizing a church in Tbilisi

Update: Two teens captured for vandalizing a church in Tbilisi 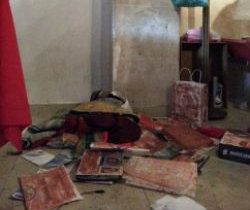 TBILISI, DFWatch–The police on Thursday arrested two youngsters for suspicion of vandalizing a church just during a religious holiday.

The detainees are two teens of 17 and 15 years old. The latter has a prior conviction.

While searching the homes of the suspects, police found numerous small icons, golden chains, ring, psalm and other goods stolen from the church.

According to witnesses, Barbare Church, which is located near Aviation Factory No 31, suffered a lot of damage on Tuesday. One of the workers at the church, Tinatin Chumbadze, was the first to notice it in the morning when she arrived. According to her, donation boxes went missing, icons were lying on the floor and there was a mess at the altar.

The head priest of the church Father Ise called it an act of vandalism, as it insults the pride of the nation, especially on the day of the Svetiskhoveli. He said that this church has been robbed before, but never suffered such ‘raid’.

The Ministry of Internal Affairs has launched an investigation on the basis of robbery causing serious damage. The perpetrators may be fined or given up to six years in prison. But the investigation is proving difficult, as there were no working security cameras in the area.