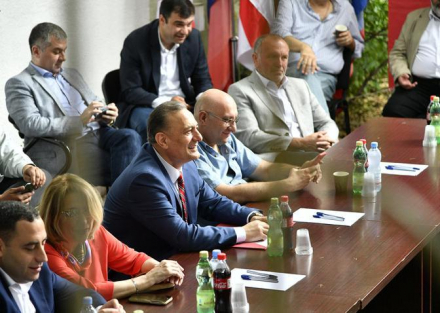 A group of Georgia’s opposition political forces, including United National Movement, the biggest opposition party, has agreed to unite their efforts “to defend” their votes against possible rigging by government in general elections in October.

“Opposition parties will work in a coordinated manner in all electoral districts, including those where we have nominated competing candidates. The task of the parties will be […] to protect the transparency of the entire electoral process and the choice of each citizen. We are going to develop concrete cooperation mechanisms to achieve this goal,” reads the declaration signed by several opposition parties at the office of the Labor Party of Georgia.

“The Ivanishvili regime has mobilized a large part of both administrative and financial resources. The state institutions serve the interests of the ruling team instead of the public. That is why the opposition considers it important for the democratic opposition to work in a coordinated manner to protect each vote and to eliminate electoral manipulation. The united opposition also says it will work with international observers to ensure the legitimacy of the election,” the document states.