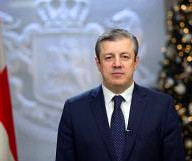 “Happy New Year to all of you who work every day and maybe in this very moment,” he said in the address, which was shown on TV a few minutes before midnight December 31.

He sent greetings to soldiers who are taking part in missions abroad, as well as citizens living and working abroad.

“I wish a happy New Year to all of our friends, who support Georgia.”

“Our success is your success as well, but it cannot be complete without our unity.”

The PM recalled recent achievements on the way to European integration and expressed confidence that despite difficulties, the country will become better and economically stronger in the new year.

“I wish next year will be a year of happiness and victory. Next year is the 25 year anniversary of Georgia’s independence,” he began.

“We have to transform the independence into liberty.”

Margvelashvili noted that he spoke with Georgian soldiers to congratulate them as they protect the country.

Catholicos Patriarch Ilia II congratulated Georgians in his video appeal, calling for kindness and wishing happiness to all.

“Have you ever thought of what happiness is? The answer lies in the ten commandments,” he said. “Let’s do good, see a person in trouble and help them.”