Georgia’s National Bank will not spend reserves on stabilizing lari

Georgia’s National Bank will not spend reserves on stabilizing lari 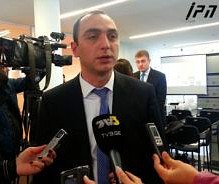 TBILISI, DFWatch–Georgia’s National Bank will not spend its reserves of foreign currencies to stabilize the lari despite a dramatic 30 percent drop earlier in the week.

The bank’s president Giorgi Kadagidze explained at a briefing at noon on Friday that it would be inappropriate and counterproductive of the bank to intervene more by selling its currency reserves.

Georgia has a monetary policy where the currency is allowed to float freely, but the National Bank must ensure a stable inflation rate, with the target set at 5% in 2015.

In a statement on Thursday, billionaire Bidzina Ivanishvili proposed that the National Bank should sell more of its reserves to keep the lari steady, like other South Caucasus countries have done.

He blamed the National Bank of ‘inactivity’ faced with the weakened national currency and accused the bank’s president of having political ties with the former ruling party, the National Movement.

Ivanishvili’s statement was parroted by politicians from the government coalition, while the National Movement is defending the bank’s president and placing the blame for the lari’s 30 percent depreciation on the government.

“I would call upon the representatives of the authorities, the government, the ruling political coalition, to stop immediately [their] attacks on the National Bank. Such attacks, first of all, damage not me personally, as the president of the Bank, but also harm and strike [at] our economy. It harms investor sentiments and is counterproductive,” Kadagidze said.

Now is not the right time to place blame or go looking for scapegoats, but it is a time for coming up with fast and effective steps which will result in the strengthening of the national currency and bring relief to people burdened by loans in US dollars, whom the lari’s drop in value has hurt the most, Kadagidze said.

He rejected the idea that the lari was devaluated because the National Bank didn’t intervene, stating that the main culprit here was ‘fundamental economic factors.’ However, he said, the lari would bounce back and there has been seen a tendency of Georgian currency stabilization.

Kadagidze also assured the audience that as long as he and his team are at the helm of the National Bank, nothing will endanger the financial stability in the country.

“In the light of the apparent stabilization of the exchange market it is particularly wrong the statement made yesterday [by Bidzina Ivanishvili]. I would like to remind you that prior to the cascade of the [critical] statements made yesterday, deals at the foreign exchange auctions concluded at the rate 2.16 [laris against 1 USD], which clearly indicates the stabilization of the exchange rate and the fact that everything is going well,” Kadagidze said.

He also said that he has been in constant communication with the government and hasn’t heard any such accusations. Nevertheless, the National Bank will cooperate closely with the government, Kadagidze said, adding that he hopes the Bank’s advice will be followed more closely.

On Thursday, the lari rebounded against the dollar from 2.2635 to 2.2494 laris per 1 USD. In currency exchange booths it strengthened itself even more and on Friday afternoon was traded in the range of 2.100 – 2.190 GEL per 1 USD.