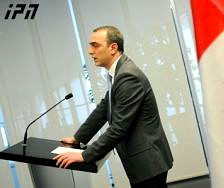 TBILISI, DFWatch–Georgia’s National Bank intervened to bolster the flagging currency lari on Tuesday, causing its value to rise four tetris against the US dollar.

The Bank put USD 40 million up for auction, out of which USD 27 million has been sold so far.

The lari currently stands at 2.4083 against USD.

This is the sixth time the National Bank intervenes after the lari began its downward journey in November, 2014. USD 40 million was sold in November and December, then again the same amount three times in February, totaling USD 240 million. But the lari continued to drop.

The Bank’s president Giorgi Kadagidze told the television channel Rustavi 2 on Tuesday that if there is an increase in investments the lari may increase and even return to its previous level.

He said there are positive trends, like extremely low oil prices, low prices of sugar and wheat, and that prices have increased for particular group of products.

“In the end inflation is a bit more than 5 percent; however unfortunately the expectation of inflation is relatively high and we will continue a monetary policy which will be responsive to this challenge,” he said.

On Wednesday, there will be a session to discuss the monetary policy, he added.