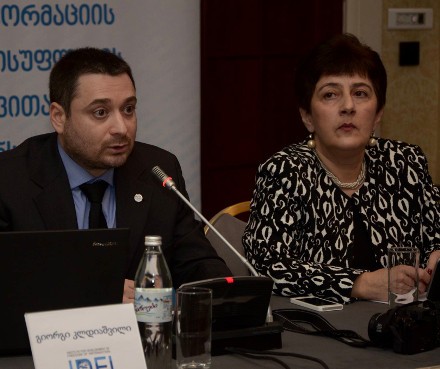 TBILISI, DFWatch–The Ministry of Economic Development is the most closed public institution in Georgia, in terms of providing public information.

This is one of the findings in a new report published Friday by the Institute for Development of Freedom of Information (IDFI).

According to Georgian legislation, public institutions have a maximum term of ten days to provide public information to an interested party.

In 2015, IDFI asked 307 public institutions to provide various information and received 3,961 complete answers, out of 8,297 requests 438 were answered partly, while 63 were rejected. The rest were left unanswered.

The Ministry of Economic Development failed to respond to all 44 requests sent by IDFI. Among 286 administrative bodies subordinate to different ministries, there were only eight institutions which didn’t respond to a single request by the organization. Seven of them were subordinate to the Justice Ministry and the eighth was the Council of Tsalka.

The Ministry of Justice worsened its performance by 45.9 percent compared to last year, while the government administration worsened by 74.8 percent.

IDFI commended the Ministry of Energy for improving access to public information by 61.1 percent, compared to 2014.

This latest report is part of the project “Public Information Database – www.opendata.ge” and was made as with the financial support of Open Society Georgia Foundation. IDFI launched the program in 2010, focusing on receiving information about financing, salaries and other issues, expanding the list of addressees over the years.

During these five years, the organization has received 24,438 answers out of a total of 30,152 requests sent to public institutions. The record highest number of answers was in 2013, when 90 percent of requests were satisfied completely or partly. In 2014, the response rate fell to 82 percent, while in 2015, the rate was 86 percent. The first year’s survey showed the least amount of openness, with only 33 percent of requests satisfied, and 48 percent rejected.

The most open institutions during the five years IDFI has carried out its survey were the Public Defender’s Office and the Gamgeoba of Dmanisi Municipality, and for this they received special awards from the organization.