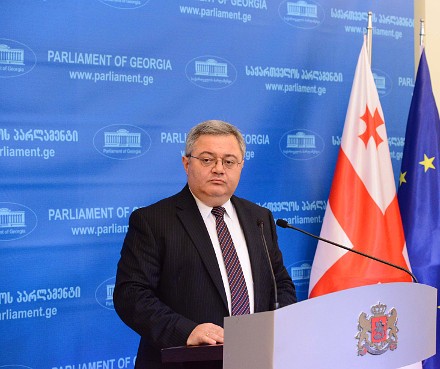 Davit Usupashvili is Speaker of the Georgian Parliament.

Shakespeare would no doubt concur that democracy has an element of drama. In this drama, a constitution may be likened to a play, minus the actors. Setting the scene, a constitution lays out the notion of a state, like the preamble of a play. Articulating the script, a constitution outlines the day-to-day political ritual by laying out the normative foundations of institutions, their competencies, and rules of political contestation. Rules are embedded in our identity, the way we live, the limits to what we can do. This is what major legal narratives are about, and what the Magna Carta was about.

Since independence, the constitutional preamble of Georgia declares that “we, the citizens of Georgia, whose firm will is to establish a democratic social order, economic freedom, a rule-of-law based social State, {and} to secure universally recognized human rights and freedoms.” This is an emotional statement about Georgia’s identity, rules, and the limits to what we can do.

All democracies share a common identity, with the Magna Carta in the mythical role of a proverbial “Old Testament.” Why is a piece of paper signed 800 years ago between King John of England and his barons still so important in London and Washington, as in Tbilisi?

History alone does not account for the significance of this document, signed on June 15th, 1215. King John, best known as the legendary foe of Robin Hood, was immortalized for a compromise he unwillingly made and willingly betrayed. First, he invaded Normandy to reclaim his family’s fiefdom, and was defeated. He then wanted to pass on the bill for this invasion to his barons, who revolted and forced him to sign the Magna Carta. When King John broke his promise, the barons invited the French King, to invade England, which he did.

Clearly, the significance of the Magna Carta is cultural or mythical, rather than historical. Georgia, before 2012, had never had a peaceful transfer of power via elections, despite our constitutional preamble. Still, the narrative was there. It was reality that failed our democratic expectations, rather than the other way around. As with the Magna Carta, certain ideas in the Georgian constitution had a life of their own. The most prominent of those ideas can also be found in the Magna Carta, namely that “no free man shall be seized or imprisoned…except by the lawful judgment of his equals or by the law of the land.”

When the Magna Carta spoke of “equals” and “free men” it referred to barons; and when it spoke of “lawful judgement” and the “law of the land”, it referred to the agreement which was soon broken. But, with the same words in the mouths of people seeking “equality, fraternity and liberty,” the play would be acted out differently. The Magna Carta captured the imagination of British and American revolutionaries, thinking of freedom in a very different way.

For social contract theorists, like Hobbes, John Locke and Rousseau, “freedom” was a set of rights and obligations. It was inconceivable in the realms of arbitrary and unchecked authority, without law, without sovereignty. This is why a centuries old document that undermined the power of “divine” – hence unchecked – authority was treated in the 17th to the 19th Centuries as the “Old Testament” of democracy. Lord Coke in England, William Penn, Thomas Jefferson, James Madison, and even Tocqueville in the US quoted the Magna Carta as a foundational narrative of rights, liberties, and democracy. The King submitted not to his barons, but to an agreement. That was the key.

And this 17th century reading of a 13th century document is key to Georgia’s identity today. We are now a constitutional civilization, in which politics is not always about rule of law, but it is always about rule by law. This describes modern governance, characterized by the legal identity of each individual, so that from cradle to grave our civic consciousness is indistinguishable from our biological existence. Born as Soviet citizens, we became free Georgian citizens. But we were always citizens. We have names, passports, and a sense of identity with bonds of solidarity, language, and common obligations.

In Georgia, we are still gaining this notion that power is realized through legislation, that politics takes place amongst “peers” or citizens, that freedom and power are inconceivable without limits, norms, or legislation, and that the winner does not take all but only what is rightfully due to him or her. But, the idea is there and has a life of its own. This is why Georgians, as much as Britons and Americans, are celebrating the 800 years of the Magna Carta. If this sounds dramatic as a claim, that makes it all the more Georgian.