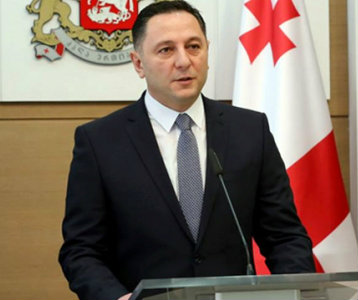 TBILISI, DFWatch–Georgia’s new interior minister says ‘certain forces’ are attempting to destabilize the country, but Georgia won’t allow a ‘Ukraine scenario’ to be repeated in Georgia.

After journalists asked Vakhtang Gomelauri to specify if he meant the former ruling party, he rejected by saying that he didn’t mean any certain political party.

In spring, his predecessor Alexandre Chikaidze claimed that the National Movement was planning to organize Kiev-style protest camps in Tbilisi and were collecting tires for this purpose.

Today, Gomelauri said before the government session that there are ‘certain reports’ that various forces are attempting to organize Ukraine-type events in Georgia.

“God save us if the same repeats itself in Georgia,” he said ,but after the government session the interior minister specified that he didn’t mean the National Movement.

He continued saying that there are certain forces who want to destabilize not only Georgia but the entire world. The minister didn’t specify whom he meant.

“You know there is a war in Syria. There is disorder in different states. Don’t underline a particular party. I never mentioned the National Movement.”