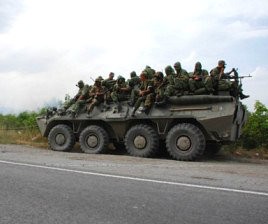 Russian soldiers in Georgia in 2008.

TBILISI, DFWatch–Members and supporters of Georgia’s current and previous governments traded accusations on the 11th anniversary of the war between Russia and Georgia.

Members of the incumbent government once again blamed the previous government and personally former President Mikheil Saakashvili of irresponsible actions which brought Russian troops on Georgian soil. United National Movement (UNM) and other opposition groups on their part accused the government of downright treason.

Irakli Garibashvili, former PM and a confidante of Bidzina Ivanishvili, accused UNM and Saakashvili of being “co-authors” of the occupation.

“The occupation has an author, and this author is identified – it’s Russia, and this is recognized, inter alia, by the international community. But the occupation has a co-author, without which it would become impossible. This force is the National Movement and its leader Mikheil Saakashvili, whose treacherous and destructive policies made the Russian occupation possible,” Garibashvili wrote on Facebook.

Some other high ranking members of Georgian Dream made statements in the same vein on Wednesday.

The opposition, however, thinks that accusing Georgia’s former government of starting the war amounts to treason, as it absolves Russia of responsibility.

“What we were able to do in 2008 – to save Georgia – we, politicians, didn’t do in 2012, when Ivanishvili came to power with Putin’s support. The presence of Ivanishvili in power is a continuation of Putin’s war against the Georgian people,” Saakashvili said.

Bidzina Ivanishvili and Minister of Justice Thea Tsulukiani have been actively lobbying the Hague International Criminal Court for several years to convict the Georgian military of participating in a defensive war, Mikheil Saakashvili claimed.

“At this moment, while I speak, they continue these efforts,” he added.