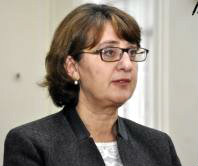 Defense Minister Irakli Alasania was dismissed last week because he according to the prime minister was trying to turn a corruption investigation among his staff into a political issue.

The foreign minister and the minister in charge of Georgia’s European integration resigned in protest.

Now ex-Foreign Minister Maia Panjikidze says she suspects there have been negotiations and plans in advance of what happened, plans which may end with Alasania’s detention.

“I think this drama must have an appropriate finish, but Irakli [Alasania] is not scared of this, neither am I. They can arrest me too, if they want.”

Speaking to Imedi TV, Panjikidze suggested that the prime minister should have been the one to resign after he sacked the defense minister, a step which sparked a crisis within the governing Georgian Dream coalition.

“The prime minister should have resigned, as he created an absolutely unhealthy environment in the place where Georgian politics is being made.”

Panjikidze, who recently joined Alasania’s Free Democrats Party, criticized some of the government members, including the justice minister, for being in the same room as the prime minister, who called their friend Alasania ‘unwise and adventurous.’

“One of the reasons why I resigned was that I couldn’t sit at the government session where a colleague minister, who used to be an ally for three years, and two years a defense minister, sitting next to you, is being called such kinds of words,” she said, and added that Justice Minister Thea Tsulukiani ‘personified’ what she was talking about.

Tsulukiani, who has been a member of Alasania’s party, was expected to resign as well, but she preferred to stay on and said that she will join the party later when she is no longer a minister.

Addressing the criminal charges brought by the Prosecutor’s Office against officials in the Defense Ministry, Panjikidze said this had been a sign for her that there was an attempt to interrupt Irakli Alasania, who was visiting capitals of two ‘skeptical’ countries. By this she meant Alasania’s visit to Germany and France, at the time when five defense ministry officials were detained.

She said it is well known that those two countries are not great supporters of Georgia’s NATO integration and Alasania was there to assure leaders that Georgia is ready to fulfill NATO’s proposed package.

“This was a sign for me that they were interrupting a minister who was visiting two very serious capitals, in what he was doing there,” she said. “There was no communication. No-one called him and said such a thing was to be expected.”

She said Alasania had a lot of contacts and great authority abroad and that appointing a ‘completely inexperienced’ person as minister will ruin ongoing processes as the new minister will have to build the same trust as Alasania had from scratch.