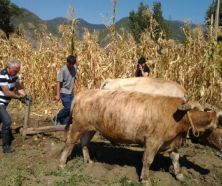 TBILISI, DFWatch–Georgia’s ruling party has decided to ban the sale of agricultural land to foreigners by adding a clause to the Constitution.

PM Giorgi Kvirikashvili announced Thursday that a passage will be added to the Constitution to ban the sale of land to persons who do not have Georgian citizenship.

The decision was made after consultation between members of government and parliamentarians from the majority, the government wrote in a post on its official website.

“This entry directly echoes the requirements of a large majority of Georgian citizens. I think it will be a decision that the governing team must make,” the prime minister said.

The move is likely to be seen as a bow to vocal conservative groups in the country’s politics who have demanded such a measure.

Following last year’s parliamentary election, Georgia’s ruling party controls a large enough majority to change the Constitution on its own.