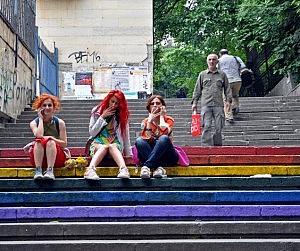 TBILISI, DFWatch–Over half of Georgians think the state should protect the rights of lesbians, gays, bisexuals and other sexual minorities, but four out of five want it to be illegal to demonstrate for LGBTI rights, according to a new survey by Women’s Initiatives Supporting Group (WISG).

The feminism and minority issues NGO presented its findings at Radisson Blu Hotel in Tbilisi on Thursday, together with Human Rights Education Monitoring Center (EMC). One of the main findings in the study is that Georgians think LGBTI rights should be protected, but that sexual minorities should not impose their lifestyle on others.

The questions in the survey also dealt with stereotypes about LGBTI people. For example, over 83 percent of the respondents believe that most gay men are feminine; 35.5 percent think that HIV/AIDS is primarily a disease found among gay men; 35 percent think that lesbians hate men. There were also a minority of 7 percent, who believe that in order to join the EU, Georgia has to legalize same-sex marriage.

51 percent agreed that LGBTI rights had to be protected, 29.5 percent of respondents somewhat agreed, but said gays and lesbians should not impose their lifestyle on others. 5.1 percent said they were neutral in this issue, others disagreed or did not know.

80.5 percent of the respondents said that the LGBTI rallies should be banned by law, 4.3 percent were neutral, the rest agreed.

80.2 percent said they thought homosexuals should not be allowed to work with children and adolescents, 4.5 percent were neutral, the rest agreed.

The other report, presented by EMC during the same conference, was an in-depth analysis of the legal environment for LGBTI people in Georgia.

“Regardless of the determined legislative guarantees, the adoption of which was mainly related to the fulfillment of international obligations, the human rights situation of LGBTI individuals in the country is grave, manifesting in their subjection to systemic violence, discrimination, and harassment,” the authors of the report wrote.

The report described in detail why LGBTI people do not have an equal environment and how homophobic or transphobic attitudes found in people violate their basic human rights.