Georgians show support for Ukrainians in many ways

Georgians show support for Ukrainians in many ways 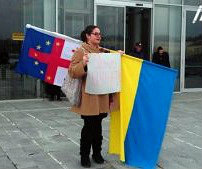 Gvantsa Chkhivadze wanted to tell the Georgian president that there is a war for Ukraine, which is also a war for Georgia. (Interpressnews.)

TBILISI, DFWatch–One lone woman demonstrated in support of Ukraine in front of Georgia’s parliament on Friday. Georgians are showing solidarity in a number of ways after the bloodbath in Kiev.

Gvantsa Chkhivadze, who represents Movement for Independence and Euro-Integration, planned a solidarity rally through Facebook, but no-one showed up except herself.

“I want to remind the president, who came to Kutaisi for the first time [today], that there is a war in Ukraine and this war is for Georgia too,” she said.

The same movement organized another rally in Kutaisi a few days ago, also in support of Ukraine. At that demonstration three people showed up. Participants said they were there to express solidarity with the Ukrainian people.

For the last couple of days, rallies have been held in the capital, in Batumi and other parts of Georgia.

Friday, youth came to Ukraine’s consulate in Batumi and placed candles in the shape of a cross as a tribute to those who died during the clashes.

Lasha Adamia from Youth Initiative for a Future Georgia said that either Ukraine or Georgia will accept losing its freedom.

The demonstrations continue. On Saturday people planned to gather at Rustaveli metro station in Tbilisi, near a statue of the Ukrainian poet Taras Shevchenko.