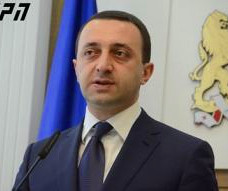 TBILISI, DFWatch–Georgian politicians expressed support for and solidarity withh France on Saturday after the terrorist attacks in Paris.

Expressions of support came from politicians as well as organizations and ordinary people.

Three bomb attacks and six mass shootings left over a hundred dead in the French capital Friday night. 87 of the killings took place in a theater.

Prime Minister Irakli Garibashvili called the events in Paris a ‘shocking tragedy’ which he said unites the civilized world.

“It unites us in support of France and the French people in this grave moment, but on the other hand it unites us against the greatest evil – terrorism,” his statement reads.

President Giorgi Margvelashvili expressed condolences to the president of France and the French people.

“This is a crime committed against the civilized world and humanity, and we should unite in fighting against it,” he wrote in a letter of condolence. The letter goes on to say that he and the Georgian people share the pain of the French people and support them.

The speaker of parliament said it was necessary for the international community to fight together against the ‘global disease’ of terrorism.

Ambassador of France to Georgia Renaud Salins thanked Georgians for their support.

In a comment to Rustavi 2, he said that it was an attack on freedom and democracy, which Georgians understand well.

Leaders of opposition parties also expressed their solidarity with France.

“In these grave moments our thoughts are with the people of France,” Davit Bakradze, a member of parliament for the National Movement said on Saturday.

“I believe that the fear of terrorism cannot suppress the freedom loving French nation,” Irakli Alasania of the Free Democrats said.

A rally organized through Facebook will he held in front of parliament building in Tbilisi on Saturday under the slogan “La solidarité à la France!”

“We will be meeting at the parliament of Georgia to express our deep condolences with the French people and to pay tribute to the ones who died during the Paris attacks,” groups wrote on the social networking website.