Georgians are split on minorities issues

Georgians are split on minorities issues 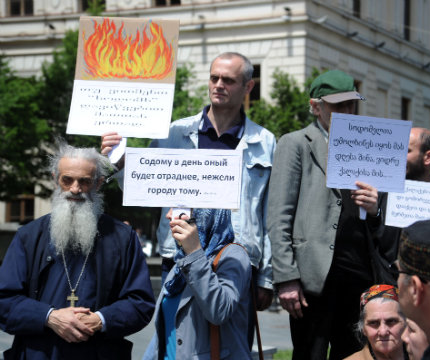 TBILISI, DFWatch–The latest survey of public attitudes, published by National Democratic Institute (NDI), shows that Georgians are split in their views on the need to protect minorities.

When it comes to protection of gays, lesbians and other sexual minorities, only 24 percent say they think it is important to protect their rights.

25 percent say they are ‘neutral’ about providing such protection, while 27 percent think it is not important.

21 percent of Georgians say it is not important at all that sexual minorities are protected.

74 percent of the questioned aren’t aware that government has decided to fund the Orthodox Church of Georgia with 25 million lari. 20 percent were aware of it. 55 percent of them approve this allocation of money, 21 percent disapprove it, while the rest don’t know.

The Orthodox Church used to be the only church receiving public funding and the financing has been gradually increasing. This year, the government proposed to also fund four other religious communities with a total of 4.5 million lari: the Catholic, Muslim, Hebrew and Armenian Apostolic communities. 75 percent of the questioned didn’t know about this plan; only 18 percent were aware of it.

31 percent of those who knew about it approve of the decision, 39 percent disapprove, the rest don’t know.

11 percent of respondents said they think it is very important to protect minority rights in Georgia for its democratic development, 51 percent say it is important, 18 are neutral, 9 percent think it is not important, the rest don’t know.