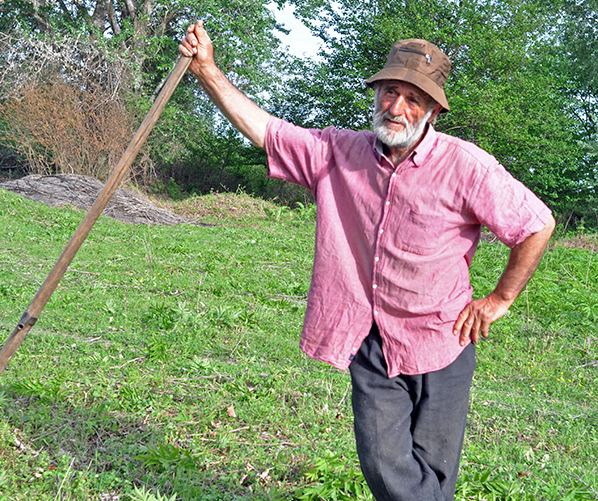 Ioseb Giuradze in Erisimedi says they have little contact with people on the other side of the border, but the situation is peaceful. (DF Watch.)

TBILISI, DFWatch–Erisimedi is a small village right on the Georgia-Azerbaijan border with a population of not more than a few hundred.

It belongs to the Georgian municipality Sighnagi, but lacks a clear demarcation of the border with Azerbaijan, which has caused problems for farmers and even led to an incident in which a teenager was shot.

When DF Watch visited, the mobile phone switched over to Azerbaijan mobile operators, while Georgian operators were out of reach.

We spoke to Ioseb Giuradze, who was working on his land in couple of meters from the border. He said the border is primitive, but locals recognize where it is. He also has cattle and says that some of the villagers now plan to have vineyards. Some grow potatoes and onions.

“Those are broken wires. They break with just one touch,” he says, adding that there is not much contact with people on the other side of border, but it is peaceful.

Most people here are Muslims, but there are some Christians too. Erisimedi has one church and a small Muslim prayer house, and there has never been any religious conflict, they say.

The place was built in 1989 to accommodate people resettled from Adjara after a landslide. It is situated on the right bank of the river Alazani, and in summer there are often problems when the river gets flooded.

Ramaz Shavadze, an eco-migrant from the Adjara region, says villagers don’t have much problems. There is one clinic offering outpatient care, but the doctor comes to the village only for a few days per week.

Shavadze has lived here for 16 years. He says most of the people here are employed as border guards or in the schools; the rest are working the land or keep cattle. There is one daily minibus service to the village, and now locals have asked the government to arrange for one more form of transport which will function twice a week, but yet it is not solved.

For several years, it has been impossible to enter this small village without being checked by border police, who are working day and night checking everyone who comes there.

April 1, 2010, an Erisimedi local, Akhmed Ibragim Gaurhashvili, 16, was killed by Azerbaijani border guards when he was tending to cattle and crossed the border. Everyone in Erisimedi knows the story and will tell it to anyone who asks.

Akhmed belonged to a small group of ethnic Chechens called Kists who have historical roots in the Pankisi Gorge in the north of Georgia, near the border with Russia. Although most people in Erisimedi are eco-migrants from west Georgia, there are also some who came here from Chechnya. 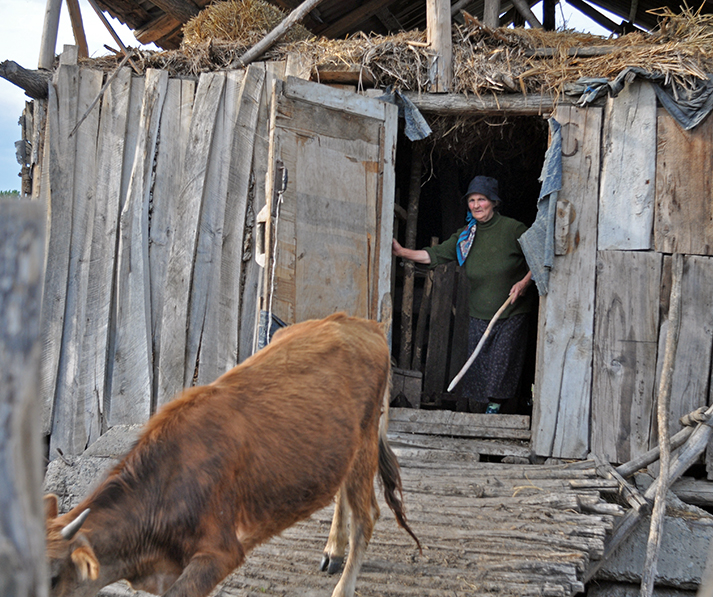 When the incident happened, Akhmed was in 12th grade in the local school. One day, he was trying to get the cattle back home, when he was shot the in head, villagers remember.

For several years, it was prohibited to take photos or video in the village after the tragic incident, but today it is no longer a problem to take pictures or video.

A few months after the incident, Deputy Foreign Minister Nino Kalandadze said that the village is on ‘disputed territory’ but process to delineate the area was in progress; that is why there were restrictions there. But the demarcation of the border is still not finished.

Some villagers claim that there are tens of acres of agricultural lands which are on the other side of the unmarked border, but they cannot use it as Azerbaijani border guards are controlling that area. 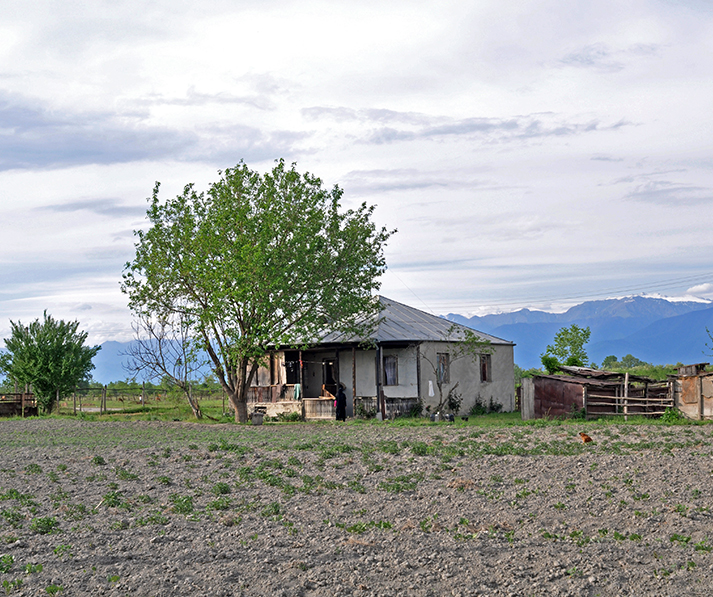 In Erisimedi, there are about ten households of Kists. We spoke with a Kist woman, about 30-35 years old, who lives alone in Erisimedi. We asked what the biggest problem in the village is. She said it is transport and road issues, as there is no good municipal transport movement and the roads are very bad. But, she added, she doesn’t care much about it as her religion doesn’t grant her the right to go to people and leave the house.

“If I need something I have to go to the market to bring something, because I am a single girl,” she said, but didn’t want to say why she is living alone. She feels pessimistic about seeing photographers or journalists in the village, as she thinks there is no point reporting about problems, as nothing will change.

The woman says she is from Chechnya, but left a while before the Second Chechen War.

“I am Kist. We left a while before the war. I live sometimes in  Pankisi too. We are there and we are here,” she says, adding that the ten families in Erisimedi all are from Pankisi.

She remembered the operation in Lapankuri carried out by the previous government in the end of August, 2012, when 14 people were killed during a shootout near the Russian border. The operation followed the alleged kidnapping of five boys from the Pankisi Valley. The government said the operation was against rebels from North Caucasus. Eleven of those killed were rebels, among whom a few were Russian citizens. The rest were two law enforcement body employees from Georgia and one military doctor.

A woman from Erisimedi said time will come for revenge.

“But we are not in a hurry. We are such a breed where it is not important who will be men, or women, all will take revenge. Everyone knows who is guilty, this is our business,” she said, referring to the vendetta-like customs of some ethnic groups from  Caucasian mountains, especially Chechens. She refused to provide any details, however.

She continued saying that Kist families have been living in this village for about 16 years and they never had any serious problems.

When Akhmed Gaurhashvili was killed, there were threats from locals in the village Duisi, in Pankisi Gorge, that they would take revenge. They demanded that the government investigate who killed the boy, but the results of the investigation are unknown.

Now, villagers say the situation is calm. Nothing has happened since then. If cattle crosses the border or come across from Azerbaijan, locals from both sides send them back without going near to the border, which is a condition. In some parts, it is thin wires or narrow channel or a line of trees.

Nino Zurashvili, from one of the two Kakhetian families living here, says that for two years there have been no problems with the border. She says, earlier when cattle was crossing over to the other side, they weren’t able to bring them back, but now this problem is solved.

When we asked if they are allowed to cross the border, she said that no, no-one goes to the other side, but the cattle isn’t going there either.