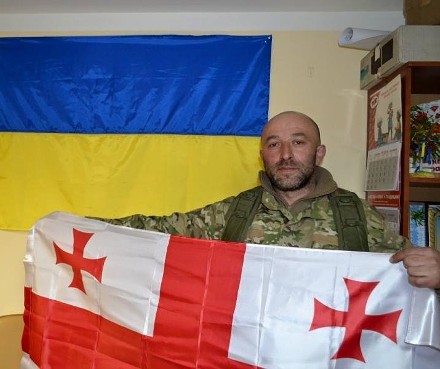 Giorgi Janelidze died during mine clearance work near the coastal town Shirokine.

The other fighters came under fire as they were trying to recover the body, and it took until Saturday to bring it back with the support of OSCE personnel.

Janelidze had lived in Turkey the last few years, and went directly from there to Ukraine to fight against Russia.

Among the other members of his unit, he went by the name Satan.

The Azov battalion is among over thirty extreme right wing battalions funded by private investors, notably the oligarch Ihor Kolomoisky.

Members of the Azov battalion are known to hold pro-Nazi, white supremacist and anti-Semitic views and carry the Nazi symbol Wolfsangel on their uniforms.

Kiev has sent right wing extremist groups to the frontline because their soldiers are more motivated than the regular army.

Amnesty International documented atrocities committed by another of the extremist battalions, Aidar, which according to the organization uses ‘abductions, unlawful detention, ill-treatment, theft, extortion, and possible executions.’ Newsweek also reported that the unit beheaded hostages.

Janelidze was the third Georgian killed fighting along pro-Kiev forces, while one more was killed during fighting pro-Russian separatists.

More than sixty Georgians are currently fighting among various pro-Kiev groups in Ukraine’s year-long war, mostly former military officers. About a dozen Georgians are fighting for the Donbass side.