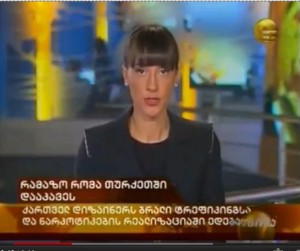 The three national TV stations First Channel, Rustavi 2 and Imedi used the same footage and had their news presenters read the exact same script, reporting on the death in police custody of Solomon Kimeridze.

TBILISI, DFWatch – Confusion continues over a detainee’s suspicious death at a police station, after a Georgian website released photos of the victim, Solomon Kimeridze, showing bodily injuries which could be the result of torture.

Yesterday evening, all three national TV stations showed the exact same news report with the exact same manuscript being read by the news presenters, further strengthening people’s claim that one person is planning and writing scripts for the news of all three channels; Rustavi 2, Imedi and the Georgian Public Broadcaster.

A Youtube upload of the news reports (watch it here) has caused an intense discussion on social networks in Georgia.

Protesters gathered in front of the parliament building today to demand an objective investigation into the case.

Numbering around a hundred, they gathered on Tbilisi’s main avenue Rustaveli, holding candles. There were representatives of non-governmental organizations and the media, as well as ordinary people.

The Public Defender also appealed to appropriate bodies to openly and objectively investigate the case, which has raised suspicions that ill-treatment as the real cause of death.

Solomon Kimeridze was called to come to the police station in the Khashuri region to be interrogated regarding a case related to robbery of an apartment.

During interrogation, he fell from the stairs and died, according to the official version. But there are many who consider this version suspicious.

The photos published by the website Tspress.ge shows a number of injuries on his body which in fact are impossible to have been inflicted only by falling from the stairs.

The lawyers’ group Georgian Young Lawyers Association demands to make public all the evidence related to the case, considering the public interest: the forensic examination, video footage from police surveillance cameras and photos taken at the place where it happened.

Another confusing fact is that Solomon Kimeridze was interrogated without having the status as neither arrested nor charged with anything, which means that his freedom was illegally deprived.