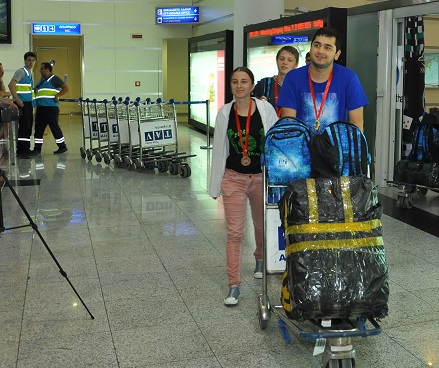 The Georgian team won one gold and two bronze medals. (Photo published by the Education Ministry.)

TBILISI, DFWatch–A team of Georgian school pupils won one gold and two bronze medals at the 26th International Olympiad in Informatics, which was held in Taiwan July 13-20.

The Georgian team consisted of four pupils and two of their leaders. This year, more than 80 countries participated in the Olympiad. Since 2005, Georgians have won two gold, five silver and 17 bronze medals.

This year, Georgia is in 17th place among 82 countries with three medals. http://stats.ioinformatics.org/results/2014

Nikoloz Svanadze has won bronze medals twice in past Olympiads: in 2013 and 2012.

The first International Olympiad in Informatics was held in Bulgaria in 1989 and was sponsored by UNESCO. It is usual that each participant country sends a delegation of four participants and two accompanying adults.