Georgian soldiers to take part in military exercise in Ukraine

Georgian soldiers to take part in military exercise in Ukraine 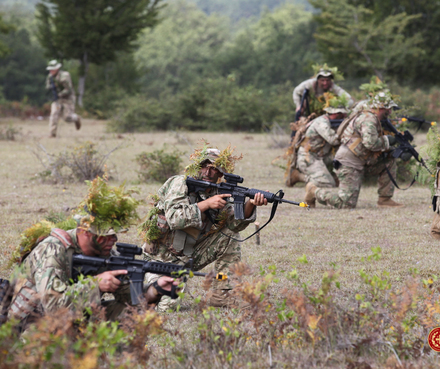 (Photo published by the Ministry of Defense.)

The multinational exercise will be conducted at the training ground Yavoriv, nearby the western Ukrainian city Lviv, and include participants from NATO members and countries in the Partnership for Peace (PFP).

There will be around 1,000 personnel  from 15 countries, including 200 military servicemen from US, Ukraine, UK, Azerbaijan, Germany, Latvia, Lithuania, Moldova, Romania and Spain, along with NATO representatives, according to Georgia’s Defense Ministry.

“The training scenario will have a multi-national brigade operating against unlawful armed formations with combined forces,” the ministry said.

Ukrainian media writes that the exercise is far from contested areas in the east and will not involve any live firing. The exercise was planned long before clashes between Ukrainian military troops and pro-Russian separatists.

Associated Press quotes Pentagon spokesperson Col. Steve Warren saying that this exercise will be the first time U.S. ground troops have been in the region since hostilities with Russia began. Soldiers from the 173rd Airborne Brigade based in Italy will take part in training, he said.

According to Warren, the annual exercise should have been held in July, but was postponed due to the crisis in Ukraine.