Georgian soldiers to remain in Afghanistan after 2014

Georgian soldiers to remain in Afghanistan after 2014 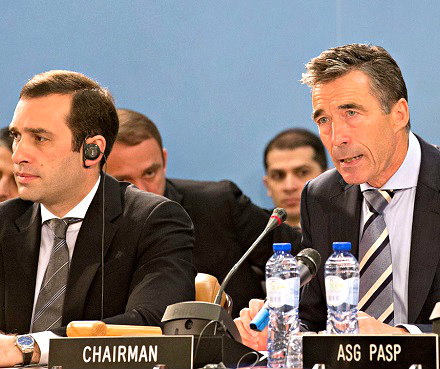 TBILISI, DFWatch–The NATO-Georgia commission held a session in Brussels on Wednesday as part of a meeting of ministers from member states.

The Alliance’s Secretary General Anders Fogh Rasmussen opened the session by reiterating the importance of Georgia’s participation in ISAF, which the country is the largest non-member contributor to.

In his opening speech, Fogh Rasmussen said that NATO continues to follow the challenges and developments that Georgia is experiencing within its borders.

“We expect from the Georgian government to respect the rule of law, human rights and the rights of minorities. We encourage Georgia to pursue these key reforms and to strive to hold free and fair presidential elections at the end of this year,” he said referring to the upcoming election in October, 2013.

He recalled the pledge NATO made in Bucharest in 2008 to accept Georgia as a member some time in the future, and said it will become a member ‘as soon as it fulfills the membership criteria.’

Minister of Defense Irakli Alasania told the ministers about the reforms Georgia is conducting in the defense sector.

He and Fogh Rasmussen later met separately to discuss Georgia’s participation in ISAF.

Alasania said that Georgia will be participant in the post-ISAF period after 2014 and along with changing concept of the mission, the format of Georgia’s participation will also change.

“We won’t be involved in direct military actions. Naturally, the number of our soldiers will also change, but the details will get clearer when NATO presents its own plan, concept, for how the operation will change and what role Georgian soldiers will have,” he said.