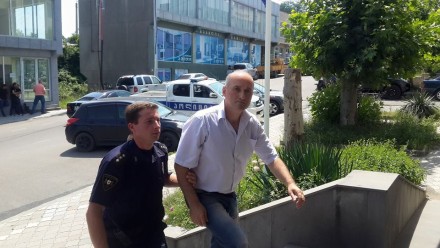 TBILISI, DFWatch–The new party Socialist Georgia canceled its founding congress on Thursday, after a quarrel with a protester led to the arrest of one of its members.

The assembly was planned held at the music school
in Telavi, a town in the eastern Kakheti region. But the event drew protesters angered at the message voiced by Socialist Georgia, which is registered to participate in the October 8 parliamentary election.

The date of the founding assembly, August 4, is the day Georgia signed the Georgievsk Treaty in 1783, which made it a Russian protectorate. One of the new organization’s goals is to seek closer relations and sign a military treaty with Russia.

One of the protesters, journalist Roman Kevkhishvili, tried to get inside the building, but was prevented. He shouted: ‘Russia is an occupant, Putin is a murderer.’ Leader of the United Communist Party, Temur Pipia, slapped him. Kevkhishvili threw an egg at him in response.

A spokesperson for the Ministry of Internal Affairs (MIA) told DFWatch that an investigation has been launched under article 125 of the Criminal Code, about beating, which may lead to a fine, up to 180 hours of community work, or corrective labor for up to 15 months.

“I came here with the T-shirt where Soviet symbol is defaced. These slaves of Putin were furious with this T-shirt. They prevented me from going inside. There was a verbal dispute and unexpectedly it turned physical,” Kevkhishvili said.

Pipia told journalists that Kevkhishvili insulted him, which is why he slapped the journalist. Pipia was taken to the police station in Telavi.

After the incident, leaders of Socialist Georgia canceled the founding congress and assembled instead at the Erekle II monument, bringing flowers.

Socialist Georgia leader Valeri Kvaratskhelia, who is also leader of Neutral Georgia Party, said that the new party’s goal is to bring the country closer to Russia and sign military-strategic treaty with that country. Furthermore, the party wants to create a Socialist system.

People who came to the protest rally said they protested against pro-occupation forces attempting to promote Russia-supporting opinions in the country.

Socialist Georgia has formed regional branches in two towns – Gori (June 22) and Batumi (July 28). During the founding ceremony in Batumi, participants unveiled a flag of the Soviet Union, a picture of Stalin and Russian banners.

The day before the party’s planned founding congress in Telavi, the State Security Service asked the MIA not to allow Socialist Georgia to use Communist symbols – a punishable offense following a new law that was introduced in 2013.

The Freedom Charter mandated the MIA to monitor the use of Soviet symbols by public bodies, and a special commission would order the removal of such symbols or in case of disobedience, fine them 1,000 laris.

A spokesperson for the State Security Service told DFWatch that the sanctions also apply to individuals.

MIA said no Soviet symbols were used by Socialist Georgia on Thursday and their assembly was canceled.