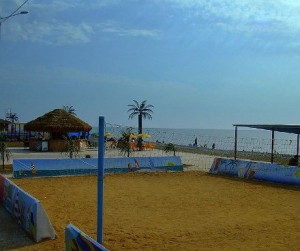 The village Ganmukhuri is symbolic because it lies on the "Abkhaz" side of the Inguri river, and sees frequent visits by President Saakashvili and other Georgian officials.

According to a statement on the Georgian Interior Ministry’s website, the attack started at 03:20 at night and lasted for ten minutes. No-one was injured.

Machine guns and two “RPG 7” grenade launchers were used in the attack, the MIA writes. After ten minutes of fire, the attackers went back across the ABL to Abkhazia.

The Ministry of Internal Affairs strongly condemns the incident and calls upon Russia to refrain from further provocations.

Georgia’s foreign ministry says in a statement that it was a provocation which once again proves the correctness of Georgia’s position; that to avoid destabilization in the region it is necessary for Russia to take responsibility for stopping the fire, and to cooperate with the EU monitoring mission, EUMM, like Georgia does; and to fully comply with the ceasefire agreement of August 12, 2008, and start pulling back its occupying troops.

Ganmukhuri is a Georgian-controlled village close to the border with Abkhazia, special in that it lies on the right side of the river Inguri. Georgian authorities have vested a symbolic value in its geographic location as a gateway to Abkhazia, and in 2007 opened a patriot camp there to train youth. Tbilisi mayor Gigi Ugulava, who is part of President Saakashvili’s inner circle and commanded troops in the 2008 war, once called Ganmukhuri “the beginning of the way to Abkhazia”.

The patriot camp was site of a controversial incident in October 2007, when four Georgian policemen were detained by Russian peacekeepers after a verbal argument. According to Georgian authorities, the Russian peacekeepers had intruded into Georgian territory and taken the policemen hostage and then beaten them. As it was portrayed on government-controlled TV, President Saakashvili came with his entourage and rescued the hostages by confronting the peacekeepers.

The Russian peacekeepers gave a different version. Their spokesman said the men had not crossed the border, but been on a routine patrol when the Georgian policemen started arguing with them. They had detained them and tried to hand them over to Georgian authorities, but the local authorities refused to receive them until President Saakashvili arrived after two and a half hours and made his TV appearance with the Rustavi 2 crew on tow.

Afterwards, the policemen were received by Georgian authorities. Footage showed that they had visible injuries after having been beaten.

In the war in 2008, the patriot camp was burned down. Later a beach resort was built. Ganmukhuri lies next to Anaklia, also a resort vested with symbolic significance as a way of showcasing the country’s development close to the Abkhaz border. President Saakashvili has made several high profile TV appearances here, and in 2011 opened a bridge connecting the two villages.

The administrative border line (ABL) is a phrase for the old borders around various republics and regions under the Soviet Union. After the 2008 war, Russia enforced the old Soviet borders, and the ABL is now the de facto border around Abkhazia as well as South Ossetia.