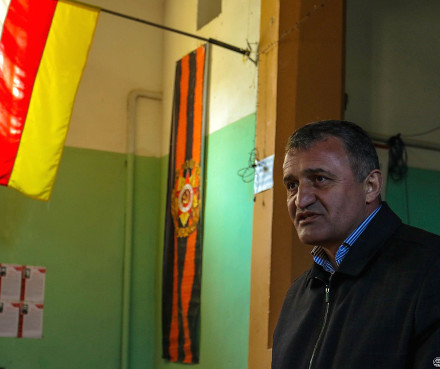 AKHALGORI, DFWatch–As eight Georgian schools in Akhalgori, South Ossetia have fully switched to Russian as the language of instruction, teachers find it hard to teach and are afraid of losing their jobs.

As most pupils don’t know Russian, this may make their families leave Akhalgori and settle instead in areas under the control of Georgian authorities.

When school started in Akhalgori on September 1, all elementary classes – from 1st to 4th grade – were required to teach using Russian language textbooks, also in schools where Georgian has been the language of instruction before.

As Elisa Gagloeva, breakaway South Ossetia’s deputy education minister states, “all the schools in South Ossetia have transitioned to a new educational standard”, which Georgian schools are unable to follow and therefore Tskhinvali decided to eliminate this shortcoming.

“Georgian schools teach using a different curriculum. For a long time we have been discussing how to adapt this to South Ossetia’s curriculum. Georgian schools reached a deadlock. Their curriculum was in disarray and we decided to solve the situation. For this purpose, the curriculum, which is taught in other South Ossetian schools, should be used in Georgian schools as well. In addition, here we have teachers’ training courses in Tskhinvali, as well as certification. Leningor school teachers do not attend either of them because we don’t have any courses or certification tests in Georgian. Why should they be exceptions?!” Gagloeva said.

Today, there are eight Georgian schools in Akhalgori, which the Tskhinvali government has returned to its Soviet name, Leningor. They teach all subjects using Georgian textbooks certified by the Ministry of Education of Georgia, except history and geography. Teaching the latter two subjects according to Georgian textbooks is strictly prohibited for political reasons. Tskhinvali authorities deem that history textbooks distort history and should be exempted. The same applies also to geography textbooks.

Students above 4th grade continue to use Georgia textbooks, but Georgian history and geography textbooks will not be allowed.

A teacher at Akhalgori’s Georgian school, who does not want to be identified, says local teachers and students are faced with serious difficulties. Most of the teachers don’t know enough Russian. Consequently, it is difficult for them to teach by the new curriculum.

“Everybody talks about not being able to teach in Russian. Parents fear that they will have to move. [Tskhinvali authorities] promise to retrain us and rebuke [us] for not learning enough Russian so far, while knowing that it will be necessary sooner or later,” she said.

The novelty was a matter of fear for parents too.

“My son does not know Russian at all. Only the basic words “hello”, “how are you”, “bye” … Will it not be difficult for him to study? I do not know what it will be,” says one of them.

Nugzar Tinikashvili, the head of the Akhalgori district in exile, states that study in Akhalgori Georgian schools’ elementary classes have not started yet.

“Because teaching in the elementary classes has switched to Russian and the relevant textbooks are not yet provided, there is no learning in the classes. Children and teachers usually attend classes, but they proceed without textbooks,” Tinikashvili said.

The breakaway authorities have not provided relevant textbooks to Georgian schools, according to the Georgian government’s office for South Ossetia and its education specialist, Soso Tsotniashvili.

Textbooks for 5th to 11th grades have been sent from Tbilisi, but Georgian authorities were warned not to send textbooks for elementary classes, Tsotniashvili told DFWatch.

Teachers are also afraid of using Georgian textbooks, as they have been warned of being checked how their lessons are progressing.

“The teachers have been told that the representatives of Tskhinvali authorities are planning to attend lessons in order to test their Russian skills,” Tsotniashvili said.

The transition of all Akhalgori schools to Russian as the teaching language was first announceed by the de facto president Anatoly Bibilov. He said that students attending classes in Georgian prefer to continue their education at Georgian universities.

“Why should the schools of the Republic of South Ossetia prepare graduates for the Georgian higher education institutions?” Bibilov asked rhetorically.