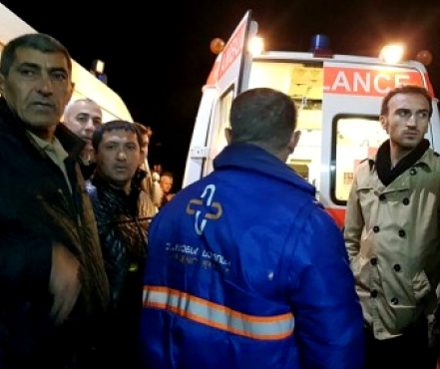 People gathered outside the hospical in Marneuli, where the wounded Georgian Dream members were being treated. (1tv.ge.)

The attack, which wounded a candidate for Georgian Dream, took place in the village Kyzilajlo, in Marneuli municipality, about 35 km south east of Tbilisi.

An unknown person went into the GD’s local branch office with an automatic rifle and opened fire at around midnight, the Ministry of Internal Affairs stated. Four persons were wounded, including a GD candidate in the local elections.

None of the victims received life-threatening injuries. Their wounds vary from light to serious, doctors say.

There is no information regarding the motive of the assault. However, Georgian Dream flatly denies that it was politically motivated.