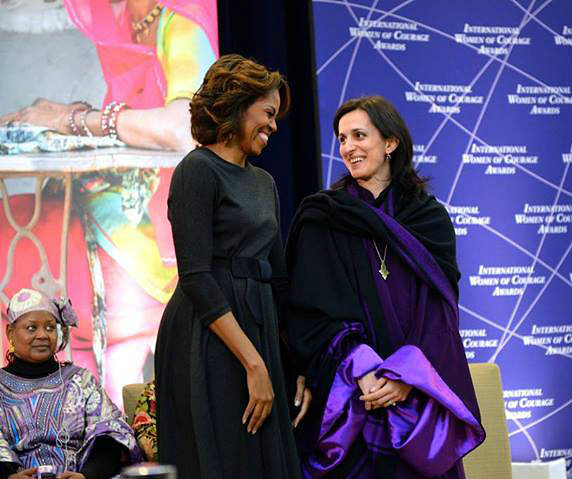 Michelle Obama and Rusudan Gotsiridze. (Photo published by the US Embassy.)

TBILISI, DFWatch–Rusudan Gotsiridze, Bishop of the Evangelical Baptist Church of Georgia, has been given the International Women of Courage Award 2014.

The award ceremony was held in Washington DC. Gotsiridze received the award because of her merits in promoting tolerance, equal opportunities and equality.

This is the first time a Georgian citizen has won the award, according to the US Embassy, which says the annual award honors women who have demonstrated exceptional courage, strength, and leadership in regards of human rights, social justice, and women’s equality.

“The United States and Georgia recognize the broader responsibility to end intolerance against all people, especially those who are marginalized,” the embassy writes in a statement.

“This award is a symbol of that joint fight against discrimination and intolerance in all their forms.”

The first International Women of Courage Award was in 2007. In eight years, 76 women from 49 countries have been awarded.

This year, the award was given to women from Afghanistan, Zimbabwe, Guatemala, Saudi Arabia, Mali, Ukraine and other countries.