Georgian Railways is to be listed on London stock exchange

Georgian Railways is to be listed on London stock exchange 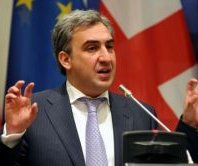 Georgia's prime minister, Nika Gilauri, says that a plan to place state-owned companies on the London Stock Exchange was postponed by troubles in the financial markets last fall, but the plan is now back on track. (Photo: Interpressnews.)

TBILISI, DFWatch – Georgian Railways is set to be listed on the London Stock Exchange (LSE), becoming the second Georgian companies to achieve a listing, after Bank of Georgia.

Prime Minister Nika Gilauri said April 12 that the government was planning to place several large companies on LSE last year, but the plans were delayed, due to the bad condition of the financial markets.

Now, Gilauri says, the government is back on track and is setting a plan in motion in the near future.

“In the near term, we will once more review the opportunity of selling a minority interest of Eurobonds in the railways, gas companies and other large state companies,” the Prime Minister said at a government session and added, ‘this is only about selling minority interest. We will not transfer managements of any of these companies to anyone, on the contrary, management will remain with the state and a majority of shares will also remain as state property.”

A spokesperson for Georgian Railways told DF Watch that the plan is to go live on LSE in May and preparations are in progress.

It is planned to place 25 per cent of shares on LSE as Initial Public Offering (IPO) in the form of International Depository Receipts (IDR).

According to data from the Ministry for Economy, more than 95 per cent of Georgian Railway’s income, which totaled USD 285.8 million, came from cargo. The company’s earnings before interest, taxes, depreciation and amortization (EBITDA) was USD 155.6 million in 2011. The EBITDA margin was 54.4 per cent, which according to the ministry is one of the highest indicators in the railway sector internationally. In July 2010, Georgian Railways issued USD 250 million worth of Eurobonds for a five year term.