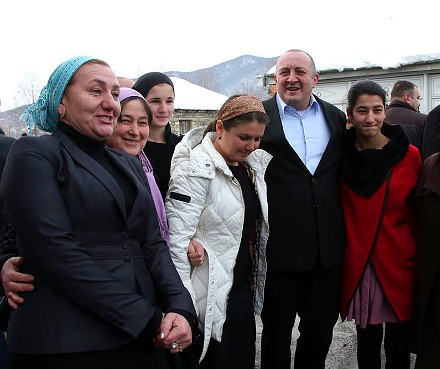 TBILISI, DFWatch–Georgia’s president visited the Pankisi valley on Saturday, a few days after Russia’s foreign minister claimed that Islamic State militants are being trained there.

Locals in Duisi, one of the villages in Pankisi in the northeast of Georgia, welcomed President Giorgi Margvelashvili and told journalists that they also invite Russia’s Sergey Lavrov to come there.

The U.S. ambassador and European ambassadors accompanied the president on the trip.

“I arrived here with ambassadors of the U.S. and EU, as I want to show them a place and a people we are proud of,” the president said.

He awarded Pankisi resident Tamar Turkoshvili the medal of honor for particular merits. For nine years she has been taking care of the damaged library in Omalo without any pay.

“The Prime Minister has stated unequivocally that there are no training centers for terrorists here in the Pankisi Gorge and you have heard the president repeat that,” U.S. Ambassador Ian Kelly told journalists.

“And we are of course cooperating very closely with Georgia in the fight against terrorism, and I take their words at face value. There are no training camps for terrorists in the Pankisi Gorge,” Kelly said.

Margvelashvili also said it is peaceful in Pankisi.

A few days ago, Lavrov held an annual press conference about the year 2015, and said that Islamic State fighters are being trained in Pankisi, which was one of the reasons why Russia introduced stricter visa rules for Georgians.