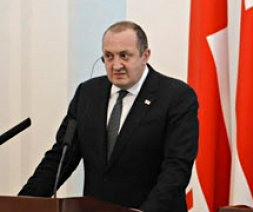 TBILISI, DFWatch–President Giorgi Margvelashvili Friday vetoed a decision by the Georgian parliament to postpone a decision about reining in the use secret surveillance by the state.

The veto is a highly confrontational move that could be a precursor of a major rift within the governing Georgian Dream coalition.

The question is who should have technical control over the means to conduct surveillance of phones and internet traffic. The so-called keys to the ‘black boxes’ are currently in the hands of the security services, but lawmakers are preparing an amendment that will take the keys away from the secret police.

Friday’s veto means that the subdued confrontation between the executive power and the President’s Office, as well as some members of the Georgian Dream coalition, enters into a new, overt phase. PM Irakli Garibashvili stated on Thursday that this is vital for Georgia’s security, for only the Ministry of Internal Affairs, which the state security services are part of, should have direct access to the ‘keys’ that enable direct and unrestricted power to tap information from communications networks, including telephone conversations and SMS-es.

The veto comes a few days after the PM and the president appeared to be on good terms at a meeting of the Security Council, which saw them kissing each other on the cheek and laughing heartily in front of the media, in spite of persistent rumours of animosity between them.

But at a special briefing on Friday, the president’s tone was harsher. He said that there is a consensus in society regarding the surveillance issue and this consensus must be expressed in the legislation.

“We should introduce a modern, democratic mode of functioning of the security services,” the president said. “I  was born in the Soviet Union where I knew that we all were under surveillance of the KGB… then we lived in post-Soviet Georgia where the Saakashvili regime picked illegal surveillance as a symbol of the strengthening of the state and then we condemned it.”

Margvelashvili praised new legislation already passed which regulates the surveillance practice of the security services and puts in place some barriers against illegal use of surveillance, which was rife during the rule of Mikheil Saakashvili and, according to some accounts, is still widespread.

However, the most controversial issue, who should hold the ‘keys’ to access the telecommunications networks, was unresolved in the law that was passed. On November 1, the deadline expires for the MIA to have exclusive access, and it was this deadline that the parliament on Thursday postponed until February 28.

In Thursday’s vote, 65 MPs voted for the postponement while 31 were against. It is interesting that along with the representatives of the National Movement, the party of former President Saakashvili, eight members of the Georgian Dream coalition voted against the proposal, all of them from the Free Democrats faction.

The Free Democrats party is a notable member of the coalition and is headed by Defense Minister Irakli Alasania. The arrest of five officials in his ministry, whom Tbilisi City Court on Thursday placed in pre-trial detention, was seen in Tbilisi by many as a sign of an offensive by the PM against Alasania.

On Friday, Viktor Dolidze, a member of the Free Democrats faction in parliament, said that the faction would not support parliament in overturning the president’s veto.

The parliament needs at least 76 votes to overturn the veto.

President Margvelashvili thinks that a ‘reasonable term’ to make final decision about the so-called keys is no later than December 1.

In a note sent to the parliament he writes that due to the importance of the issue and after a number of meetings, including recommendations from European experts, who are against law enforcement bodies having direct access to such information, he thinks that the most reasonable time for a final decision cannot be more than one month. He also writes that the enforcement of the new regulations which must be adopted by December 1 should also be within ‘reasonable terms.’

The president’s press office published a lengthy letter of about eight pages where he explains in four points what he didn’t like the amendments which parliament approved the day before, specifically to change the date from November 1 to February 28. Most of the president’s letter deals with the importance of protecting people’s privacy and to have privacy guarantees written into the Constitution and a number of local and international laws and regulations.

After the president’s veto, the new regulation will come into force on November 1, by which time the Interior Ministry’s operative technical department will no longer have access to the ‘black boxes’. But it is also not determined who will have such access. The president gives parliament one month to make a final decision about who will have access, while the Judiciary Committee wanted time until April, 2015, which was changed to the end of February by yesterday’s decision in parliament.

The speaker of parliament on Friday said that most likely parliament will discuss the president’s veto today, as November 1 is tomorrow and so there is no time left.

Shalva Shavgulidze, Deputy Head of the Judiciary Committee and one of the law’s authors, thinks that the president’s veto means that  there can be ‘serious paralyzing of the activity of law enforcement bodies and investigation activities’ in the country as there is no new system described in the law from November 1. He therefore thinks the best solution is for parliament to overturn the president’s veto as soon as possible.