Comment about the president and knitting pins rattles parliament

Comment about the president and knitting pins rattles parliament 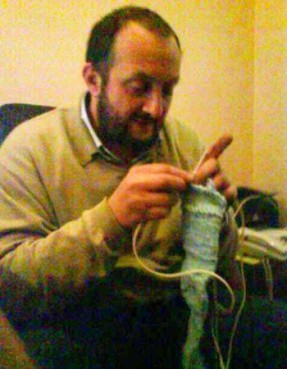 Undated photo of Giorgi Margvelashvili knitting socks, published in 2013, before he became president.

TBILISI, DFWatch–A statement by a leading parliamentarian about the president and knitting pins has caused puzzlement in Georgia. A spokesman for the president’s administration called it insulting and unethical.

“I blame Ivanishvili for taking the knitting pins out of the hands of the NGO and Soros guys (“ენჯეოელი სოროსელი”) and equipping him with veto power, ticking us and the people off,” was the offending comment made by Tamaz Mechiauri, the head parliament’s budget and finance committee.

It came as parliament was discussing the president’s veto against a draft bill that will strip the National Bank of its power to supervise private banks and other financial institutions, and transfer responsibility to the prime minister.

Mechiauri, a core member of Georgian Dream and a staunch proponent of the law, referred to a undated photo published on the Internet in early 2013 depicting President Giorgi Margvelashvili, then Minister of Education and a close friend of Bidzina Ivanishvili, knitting socks.

“The president’s veto and motivated remarks are a means of cooperation, not of confrontation and irony,” said Giorgi Abashishvili, the president’s economic advisor. “Here we heard insulting statements. You better know that ethics and culture is part of parliamentarians’ activities. The personal insult here was absolutely unfounded.”

Amid a weakening of the national currency lari, there has been increasing animosity between the National Bank (NBG), which is supported by the opposition, and the government. The NBG’s president Giorgi Kadagidze was appointed during the previous government by National Movement, which is now in opposition.

Although the ruling coalition is hostile to the NBG president, it can’t remove him until 2016, when his 7 year term expires. Some Georgian Dream MPs went as far as accusing the NBG of deliberately depreciating the lari.

Instead of replacing the Bank’s president, the government strives to strip the National Bank of its power to supervise financial institutions and hand this over to the a new Financial Supervisory Agency, which will be staffed by the parliament, i.e. by the ruling GD coalition.