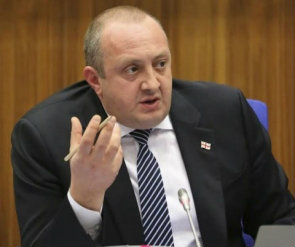 TBILISI, DFWatch–The Georgian president on Monday criticized his country’s envoy for failing to respond adequately to criticism from a Russian diplomat during a bilateral meeting in Prague last week.

President Margvelashvili criticized Zurab Abashidze, whose full title is the Prime Minister’s Special Envoy for Russian Relations, for not giving a proper response to Deputy Foreign Minister of Russia Grigory Karasin, who said in Prague last week that Georgian politicians are engaging in anti-Russian rhetoric. There is a limit to patience, he warned.

“If I had my representative at the Prague [meeting], he or she would lay out another type of response, other types of messages, to Grigory Karasin,” President Giorgi Margvelashvili said in an interview with the Georgian Public Broadcaster’s Channel 1.

He added that the format of the bilateral dialogue between Georgia and Russia will be ‘adjusted’.

“I do not think that I have to debate with Karasin. The format of the Prague [dialogue] is to be adjusted. As we all know, the format is to discuss economic and cultural issues, but such statements as Karasin made recently should have an adequate answer in the same format,” Margvelashvili said.

The last meeting between Abashidze Karasin was held in Prague on March 16.