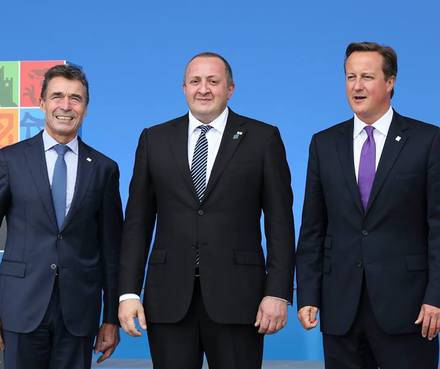 TBILISI, DFWatch–Georgian President Giorgi Margvelashvili said in a speech at the NATO summit in Wales that the events in Georgia in 2008 and in Ukraine in 2014 demonstrate that stability and peaceful development of young democracies is a significant challenge for Euro-Atlantic security.

Margvelashvili said at a meeting of ISAF countries that Georgia has been the biggest non-member contributor to the mission in Afghanistan. He thanked NATO’s secretary general for supporting Georgia on its way to NATO integration.

The Wales summit started September 4, and at the top of the agenda was the crisis in Ukraine, instability in the south, and increasing extremism in the East and in North Africa. The Georgian delegation is headed by the president Margvelashvili.

The president told journalists that the first day of the summit was very important for Georgia but also for the challenges that NATO faces. He said he had the opportunity to speak with partners about Georgia’s engagement and future plans.

“I want to confirm to the Georgian people that in fact every country perfectly evaluates Georgia’s progress and steps forwards which brings us closer to the alliance.”

Margvelashvili met with the presidents of Turkey, Romania and Poland. He also met with EU Commission head Barroso and the president of the European Council, Donald Tusk.

Defense Minister Irakli Alasania, who is also in the Georgian delegation, said on Thursday after meeting Rasmussen that the package is almost agreed with the members of the alliance.

‘We were told that Georgia is moving to a new league,” he said.

According to Alasania, the package which NATO is going to offer Georgia includes opening a training center in Georgia to train NATO and partner military units. There will be  representation of NATO military experts at the Defense Ministry and in Georgia’s armed forces to control the implementation of the package.

“Third and most important is that NATO agrees to strengthen defense weapons in terms of supporting in supplying and purchasing, so that Georgia has means of protection in case of aggression.”