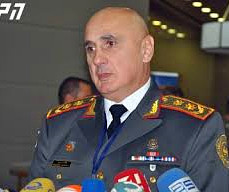 TBILISI, DFWatch–Georgia is considering offering Azerbaijan and Armenia to negotiate about the conflict over Nagorno-Karabakh, where at least 33 people have died and more than 200 have been injured during the last few days, according to the United Nations.

Vakhtang Kapanadze, head of Georgia’s joint military staff, told journalists on Monday that Georgia likely has to take on a role as mediator in this conflict, as it has good relations with both states.

“It is very unfortunate that it hasn’t been possible to solve this issue peacefully due to a number of reasons. This is a painful process for the entire region. We are carefully following events and have strong ties with our colleagues in Azerbaijan and Armenia,” he said, expressing hope that the situation will become peaceful soon.

He said that none of the sides in the conflict have requested anything from Georgia but both sides are trying to inform Tbilisi as much as possible about what is happening.

Prime Minister Giorgi Kvirikashvili expressed concern about the situation in the neighborhood during his speech at the NATO-Georgia People’s Diplomacy Forum. He expressed hope that through the efforts of the international community the conflict will be de-escalated.

Sunday, Giorgi Volsky, head of the ruling Georgian Dream faction in parliament, told Rustavi 2 that Georgia has to offer Armenia and Azerbaijan to use Tbilisi as a place for negotiations. In an interview with the same channel, Levan Berdzenishvili from the Republican Party said that Georgia has to take ‘a careful position.’ He believes Russia encouraged the escalation of conflict and it now plans to act as a ‘conciliator’ and to strengthen its influence in the region.

Vice Prime Minister Kakha Kaladze Monday told journalists that Georgia will do its best to help de-escalate the conflict, while Irakli Sesiashvili, who heads defense and security committee in of parliament, said  they gathered with the prime minister on Sunday and analyzed possible scenarios and risks which may result in case of a further escalation of the conflict.

“We are carefully following the process and analyzing how events may develop.”

The situation in Nagorno-Karabakh escalated on April 2. It is the most serious escalation since 1994. According to the UN, 3 among at least 30 victims, are civilians.