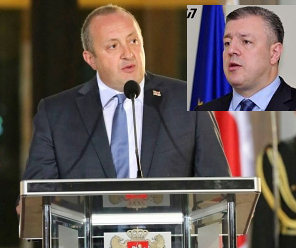 President Margvelashvili blocked a referendum bid to ban same-sex marriage, while PM Kvirikashvili (inset) vows to bring in a ban if he wins a large enough majority on October 8.

TBILISI, DFWatch–Georgia will not hold a referendum over whether to have a constitutional ban on same-sex marriage.

President Giorgi Margvelashvili made it clear Tuesday evening that he does not support the proposed referendum about amending the Constitution to define marriage as a union between a man and a woman.

The reason, Margvelashvili said at a briefing, is that there is already a proper definition of marriage in the Constitution.

The president had only spent a few days out of the 30 day deadline for making a decision about the referendum.

With two hundred thousand signatures having been gathered, the Central Election Commission (CEC) last week gave its final approval, after which the proposal also required permission from the president and the prime minister.

The proposed question to ask voters was: “Do you agree or disagree that marriage should be defined as a union of a man and a woman for the purpose of creating a family?”

This suggested referendum was registered on May 13 by Alexandre Bregadze, former Deputy Minister of Diaspora, Soso Manjavidze, former member of Alliance of Patriots Party, and Zviad Tomaradze, Director of the Demographic Society XXI.

Now, they warn that they will hold rallies outside the president’s administration and take the matter to court.

Also on Tuesday, the president had scheduled a meeting with the four behind the referendum bid, but the meeting was cancelled by the presidential administration, the reason given being the ‘blackmail tone’ in the talks with members of the initiative group.

Georgia’s Civil Code already defines marriage as a union between a man and a woman. The purpose of the now rejected referendum was to write the same specification into the Constitution, effectively banning same-sex marriage.

Prime Minister Giorgi Kvirikashvili has promised that if the Georgian Dream Party wins a sufficient majority in the October 8 election, a constitutional ban on same-sex marriage will be introduced directly by parliament, without holding a referendum.