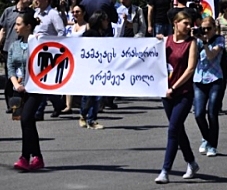 TBILISI, DFWatch–A bid to define marriage in the Constitution as a union between a man and a woman has been approved by Georgia’s Central Election Commission (CEC) after campaigners collected more than the required 200,000 signatures.

Georgia’s Civil Code already defines marriage as a union between a man and a woman, but the Constitution contains no such specification.

The question put to Georgian voters will be: “Do you agree or disagree that marriage should be defined as a union of a man and a woman for the purpose of creating a family?”

The initiative was taken by Alexandre Bregadze, former Deputy Minister of Diaspora, Soso Manjavidze, former member of Alliance of Patriots Party, and Zviad Tomaradze, Director of the Demographic Society XXI.

After CEC’s approval, the president now has one month to decide whether to approve the proposed referendum, and after that it will also have to be given the go-ahead by the prime minister.

About a month ago, another proposed referendum about same-sex marriage was rejected by CEC because not enough signatures were collected.