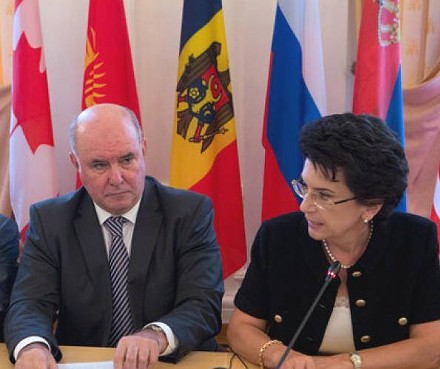 TBILISI, DFWatch–Nino Burjanadze, leader of the Georgian opposition party Democratic Movement, recently visited Moscow and met with Deputy Foreign Minister Grigory Karasin. The parties did not disclose the topic of the meeting.

Her party’s press office told us that nothing special has happened because of this visit, but that it was an ‘ordinary working visit’ as it used to be in the past and there will be many more this year and in future years.

“The declared position of the party is that we are a political force which is enabled to launch large scale political negotiations and solve issues which are frozen. Something which our government is not capable of as they cannot dare to,” Bakur Bakuradze of the party’s press office told DFWatch.

“This concerns Georgia’s territorial integrity and the Russian army brought to Georgian territory by Mikheil Saakashvili.”

He also told us that through these meetings, Burjanadze managed to solve certain problems, like simplifying visa rules. At the same time, there was made progress in facilitating the export of citrus fruits from western Georgia to Russia, progress which was not a result of the regular meetings between Karasin and Georgian diplomat Zurab Abashidze.

We asked how the party’s policies are influencing their support among voters. Bakuradze told us that a large part of the Georgian population supports the declared goals of their party.

Information about meeting of Karasin and Burjanadze was published on the Russian Foreign Ministry website and that of Democratic Movement.

The Russian Foreign Ministry’s website states that the parties discussed bilateral cooperation and aspects of how it is possible to achieve a normalizing of relations between the two states.

The website of Burjanadze’s party states almost the same. The leader hasn’t made any additional comments and Bakuradze tells us this is because there hasn’t been anything new to say.

“I don’t even understand what it means to be pro-Russian or pro-Western. A Georgian politician should be pro-Georgian and act in accordance with Georgian interests,” Nino Burjanadze told Resonance Daily (Rezonansi) before departing for Moscow.

She said that one of the interests of Georgia is to normalize relation with Russia, in order for Georgia to be united and become a democratic state.

“I am not afraid of labels. I won’t forgive breaking relations with Russia. On the contrary, I will go there and hold meetings. I think that people who cannot see how great Russia’s influence is over modern world politics are either fools or acting against state interests,” she said.

Burjanadze was one of the leaders of the Rose Revolution in 2003, but is currently considered a pro-Russian politician, an image she earned after visiting Moscow and meeting then Prime Minister Vladimir Putin in 2010. Diplomatic relations between Tbilisi and Moscow were severed after the 2008 war.

Burjanadze received 10.2 percent of the votes in the 2013 presidential election. She came third, after the candidates for the Georgian Dream coalition and the National Movement.