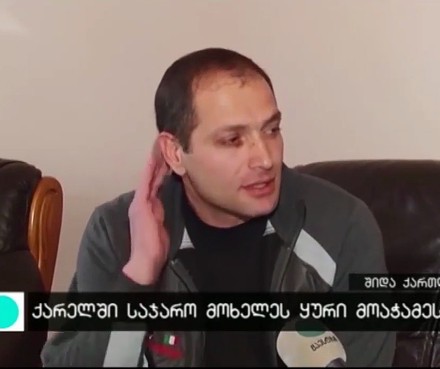 TBILISI, DFWatch–A local politician in Georgia bit off part of the ear of a colleague during a fight on Monday.

Emiko Peikrishvili, the former head of Kareli municipality in the Shida Kartli region, bit off a small part of the ear of Ilia Kelekhsashvili, assistant to the current municipal leader in a fight which according to local TV station Trialeti took place inside a car.

Peikrishvili, who now works as an assistant to the member of parliament from Kareli, Leri Khabelovi, says they argued about his successor as municipal head of the small town, Zaza Guliashvili.

Peikrishvili waited for Keleksashvili, asked him to stop the car and then sat down inside it. He protested against the fact that he wasn’t let into a session of the Georgian Dream party. The session was headed by the head of municipality, or gamgebeli. Keleksashvili told him it was a closed party meeting and he didn’t have a right to attend.

Peikrishvili then said bad things about the gamgebeli and Kelekhsashvili didn’t like it and he hit the former, who then went on to, in his own words,  ‘act adequately.’

Commenting to Maestro TV, Peikrishvili said that he cannot remember what exactly happened, but he remembers how the police came and told him the outcome of the fight.

“I can in fact confirm that Kelekhsashvili doesn’t have an ear anymore,” Peikrishvili said.

He said that he was against appointing Guliashvili as gamgebeli, claiming that he had a bad past, but didn’t specify what he meant by that.

Peikrishvili doesn’t consider himself guilty, but said he would have defended himself as possible if there had another fight.

Kelekhsashvili, who interviewed by phone, told Maestro that he has had a surgery. He remembered that Peikrishvili insulted him and he answered back with the same.

“He turned to me, grabbed my ear and I couldn’t get rid of him.”

Peikrishvili says he had a confrontation with gamgebeli Zaza Guliashvili, which was the reason for the fight.

The victim has had surgery, but the doctors couldn’t save his ear. He is now receiving treatment in Tbilisi.

Police are investigating the case under article 113 of the Criminal Code about premeditated light injury to the body, which may be punished with up to three years in jail.