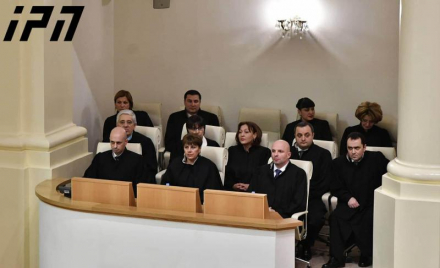 Parliament of Georgia approved 14 candidates as Supreme Court judges amid a cascade of confrontations on Thursday, which included even physical conflict between two MPs.

The list of judges includes several controversial individuals which, many civic activists argue, will eventually help ruling Georgian Dream party to tighten its grip to the country’s judiciary.

Prosecutor General Shalva Tadumadze and his deputy were among those who will steer Georgia’s judiciary for near future, as well as a small yet very powerful group of career judges whom human rights activists refer as “a clan”.

Opposition didn’t participate in the vote but some of its members attended the hearing that triggered several incidents.

Two opposition politicians from European Georgia have been blamed by GD of smuggling into the parliament and sprinkling around an unknown liquid substance with a sharp smell of “feces”.

As a result the session was temporarily suspended and several MPs applied for medical assistance. The Speaker of Parliament Archil Talakvadze said it was “chemical attack” and vowed to punish culprits. Forensic squad was summoned and the police launched criminal investigation into the case.

Although Sirtskhvilia (“Shame”), an opposition youth activist group, has assumed responsibility for this activity, the government points to two opposition female politicians, Irma Nadirashvili, MP, and Lela Keburia of European Georgia, as possible culprits. Both flatly deny any involvement.

In a separate brawl GD and Unite National Movement (UNM) MPs physically assaulted each other. The former, GD MP Dachi Beraia, later admitted that kicked his UNM counterpart Roman Gotsiridze. The alleged motive is the latter’s Facebook posts, which had been assumed as insulting by the former.

Earlier, in yet another separate conflict, a verbal confrontation erupted at the Legal Committee between its chair, Anri Okhanashvili, and opposition MPs. The former then asked journalists to leave the room and when they resisted ordered guards to kick them out causing a melee.

Meanwhile dozens of youth protesters were rallying at the parliament. Here also several confrontations occurred with the police. Several activists were detained but later released.