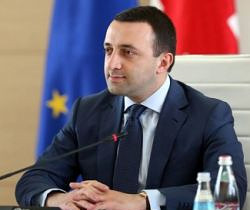 Irakli Garibashvili is preparing a trip to Kiev. (Interpressnews.)

TBILISI, DFWatch–The Georgian PM’s visit to Ukraine is being delayed for unknown reasons. Early this year, government members indicated that such a visit would take place soon.

Officials only say that they are preparing for the visit, but offer no information about why it is being delayed.

Georgia and Ukraine were seen as close partners, especially because of their similar experiences with Russian interference, but relations have recently soured after the former Georgian president and other officials from his government were appointed to high posts in the new Ukrainian government. The new government in Georgia saw this as a ‘not friendly step.’

Two of those appointed by Kiev are being prosecuted in Georgia: Ex-President Mikheil Saakashvili and former Justice Minister Zurab Adeishvili. They are advisors for the Ukrainian president. The other former Georgian officials hired by Kiev are not subject to prosecution in their home country.

It was the appointment of Saakashvili which angered Georgia’s new government the most. After his appointment, the Foreign Ministry even summoned Ukraine’s ambassador to explain the decision.

Saakashvili’s party accused the government of promoting the interests of Vladimir Putin, claiming that Bidzina Ivanishvili’s government is trying to please Putin and be seen as anti-western. They point out that government members have never made clearwhether they support the sanctions against Russia.

But government members claim the National Movement is lying and that relations with Ukraine have not worsened. The government remains committed to a western course, they say. They also said a planned visit to Ukraine by Prime Minister Irakli Garibashvili would take place ‘very soon.’ But this statement was made about two months ago. No new details about the visit have been disseminated since then.

During the same period, Georgian President Giorgi Margvelashvili visited Ukraine, accompanied by members of parliament, to participate in the ceremony dedicated to the one year anniversary since the revolution known as ‘Euromaidan.’ The delegation included the ministers of energy and economy, who also confirmed that the PM would visit Ukraine in the future.

No details about preparations

Ambassador-at-large Davit Kereselidze says the ministry wants this visit to have positive results.

“As you know, our ministers visited Ukraine and parliamentarians. Very soon, other ministers plan to visit Ukraine,” he said.

Representatives of the Foreign Ministry cannot explain to us why the PM’s visit is being dragged out in time and who is against the visit or when it will take place. There is also no information about the agenda of the visit and who are involved in the preparations.