Georgian PM on visit to Azerbaijan

Georgian PM on visit to Azerbaijan 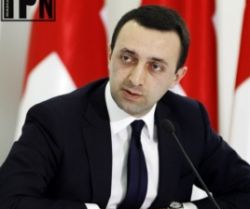 Gharibashvili will meet President Ilham Aliyev, and December 17 participate in a conference about the financing of the second phase of Shah Deniz – a gas field situated in the Caspian Sea.

The minister will address the conference, and later hold bilateral meetings with the government in Azerbaijan. His visit will end December 17.